A couple weeks ago I had the great opportunity of meeting Dave James Tzakanikas, a well-known ultra-running champion, but admittedly someone I hadn’t heard of before. Our Team Red White & Blue chapter had organized a trail run with him in Danbury, CT. I did the usual thing people do when they don’t know someone, I googled him. I was in shock when I learned about Dave, his story, his records, and his road to becoming a world champion. I was even more ecstatic of the fact that I was about to go on a run with him. During the trail run we talked about running (shocking). Dave suggested that I attend the 2014 Team Red White & Blue Trail Running Camp as the 2013 camp was soon approaching and he wasn’t sure if I could still register. I did not know much about trail running, but the idea of attending a camp seemed interesting.

Team Red White & Blue, as its’ mission states, is an organization that works to enrich the lives of America’s veterans by connecting them to their community through physical and social activity. I made a connection with Team RWB’s mission; as a veteran returning home after the service I had different expectations, the transition was not as smooth as I envisioned, nor as the TV ads made it seem. I was introduced to Team RWB through the Danbury CT chapter. They reached out to me and invited me to attend a weekly workout called “Wear the Eagle Wednesday.” Everyone in the chapter was very approachable, offered help, and followed up to find out how things were going. I felt grateful to have attended that workout, and what intrigued me the most was that the members of the chapters stay connected through one of my favorite past times and stress relievers – exercise. We wear “The Eagle” in an effort to spread the word about the impact this organization is making across the globe, but more importantly within our own community, and with the local veterans.

A couple weeks after our chapter run with Dave James, I received an email from www.trailrunningcamp.org: “You have been nominated to attend trail running camp – all expenses paid,” and I thought, “Great! Another spam email where I’ve inherited a million dollars from one of my ancestors in Africa – click here to claim!”  Then I noticed the names of some of the Team Red White & Blue officials; this was the real deal.

I had been granted the opportunity to attend the 2nd Annual Team Red White & Blue Trail Running Camp at no cost to me.  This was beyond belief. I was quickly overwhelmed with excitement, but I had only ran trails once before and didn’t know what to expect. I boarded my first plane out of JFK international airport at 06:30 hours headed to San Antonio, TX. We made a stop in Atlanta, perhaps one of the most confusing and crowded airports in the United States; it literally seemed as if people were popping up from the floor tiles – chaos. After arriving at San Antonio we were greeted by a Team Red White & Blue representative, and I shook hands with a guy in a jacket with a lot of logos on it. We boarded a bus that would take us to the camp, about a two hour drive. Needless to say it was time to catch up on some sleep.

We runners were a melting pot, different parts of the country, different military service affiliation, all levels of running ability, civilians and veterans, but we were all there for two main reasons: 1) Our passion for running; 2) Our desire to continue to serve with veterans within our community through Team Red White & Blue. 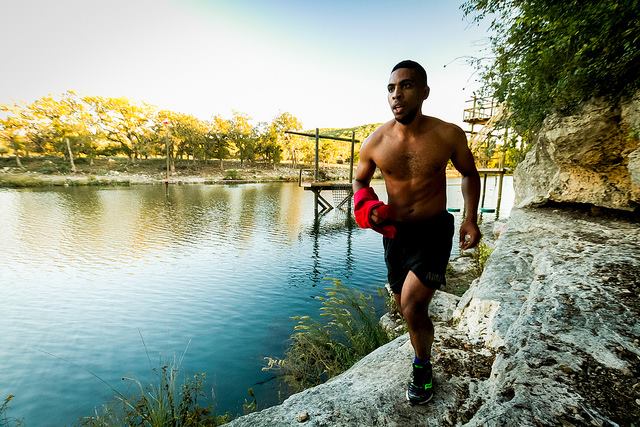 On our first night at camp, we received a welcome bag; in it there was a headlamp, and sure enough we were out running the dark trails shortly after dinner. Running through the dark on the rocky terrain wasn’t my forte, but there I was getting a little taste of what the camp was about, surrounded by a bunch of strangers that shared the same passion as me.

The camp lasted the four days over Veterans Day weekend. Every day we would kick off things with a morning run, followed by classes, more running, and free time to socialize with other runners and mentors. The runs were somewhat challenging for me, mainly because of the rocky terrain and my inexperience with trail running. Despite all this, I did not feel pressured. I was there to learn, and the veteran trail runners were very supportive and always offered advice.

Each of our meals were carefully planned to fit a runner’s demands. Meredith Terranova, ultra distance runner, and health and wellness specialist was behind this planning; she also conducted a race nutrition class. We could almost taste pizza and bacon everyday by the strong smell coming from the dining hall, but Meredith reassured us that we would not be having any of it during our stay at the camp.

Team Red White & Blue had put together an exceptional group of professional ultra-runners to be our mentors:

This is only a small list of many champions that were there to share their knowledge with us. Every single one of these athletes was very excited to be there, and to be honest I was star struck. There I was shaking hands with the president of the American Ultrarunning Association, the same person that shook hands with me upon arriving in San Antonio. I was having a conversation with the fastest 50 mile runner in North America, he had broken a record that no one else had for 33 years. I listened to a woman tell her life story about overcoming obstacles to become a champion, and set a record of running 236 miles of rugged mountainous terrain in a little over five days.

During the camp we learned about leadership, technical trail running, terrain navigation, uphill running, which happens to be one of my weaknesses, and downhill running. We learned first aid, race nutrition, injury treatment and prevention, and trail etiquette. I got a chance to listen to stories, both from elite and veteran trail runners, and no story was the same. In fact, most stories didn’t even sound like they were about running. The athletes sounded as if they had set out to go out on a quest, their stories talked about finding purpose in life. They spoke of encountering wild animals, getting lost in the dark surrounded by nothing but creepy sounds, even having conversations with inanimate objects, such as trees and trail markers.

The experience at Team Red White & Blue trail running camp has given my running an entirely different meaning, one of will, perseverance and determination. The camp has equipped me with an entirely new set of tools that I can use to better my training experience, and share with friends, family and other veterans in my community. I could not be any more grateful for this opportunity. 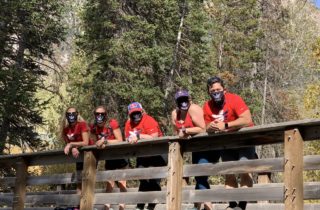 Volunteers are the backbone of Team Red, White and Blue (Team RWB). They serve as leaders in their community and are the reason local chapters … 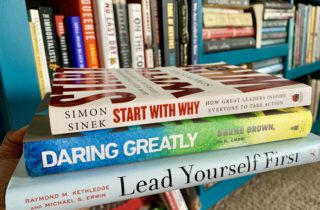 Celebrated on August 9, National Book Lovers Day is an opportunity for Eagles everywhere to check out a new book.  Since its founding in 2010, …

Volunteers are the backbone of Team Red, White and Blue (Team RWB). They serve as leaders in their community and are the reason local chapters …

Celebrated on August 9, National Book Lovers Day is an opportunity for Eagles everywhere to check out a new book.  Since its founding in 2010, …