To honor the stories, memories, and legacy of those who served, Team RWB is hosting a September 11 Moving Tribute presented by Window World and sponsored by TrueCar and Peraton. Click here to pledge your miles, and read the stories below from veterans whose lives were changed as a result of September 11, 2001.

Responding as a Member of the Army’s Old Guard

Team RWB’s Director of Operations, Brett SanPietro, was serving in Washington, D.C., as part of the Army’s Old Guard on September 11, 2001. SanPietro and his platoon were called in as part of the immediate response after hijacked American Airlines Flight 77, crashed into the Pentagon.

Though the unit was typically responsible for funerals in Arlington Cemetery, and the official escort to the President of the United States, as an infantry unit first, they found themselves on the ground with kevlar helmets, gloves, and their battle dress uniforms as part of the rescue and recovery effort.

For weeks, SanPietro and his fellow Soldiers worked tirelessly to identify and find individuals left behind in the attacks, but what stands out most to him when he reflects on that day is the image of his teammates next to him. He remembers a community, coming together to do work with the promise that they wouldn’t quit until the job was done.

“It’s important to remember how we responded, what we got right and what we got wrong. If we forget that, then all of the loss was for nothing,” said SanPietro.

Today, as Team RWB’s Director of Operations, SanPietro wants Americans to know and be reminded that we saw tremendous acts of courage and caring in response to hatred. He wants us to remember that we responded to the worst of the attacks with the best of who we were.

Most of all, SanPietro encourages Americans everywhere to take the time to come together, pledge their miles, and listen.

“We talk a lot about sharing your story because for many of us that’s a big ask. It’s hard to open up and talk about things like this. Just as important, though, is the listening. In a time when so much is lost in communication across social media, I most appreciate people coming together to hear and understand each other.” 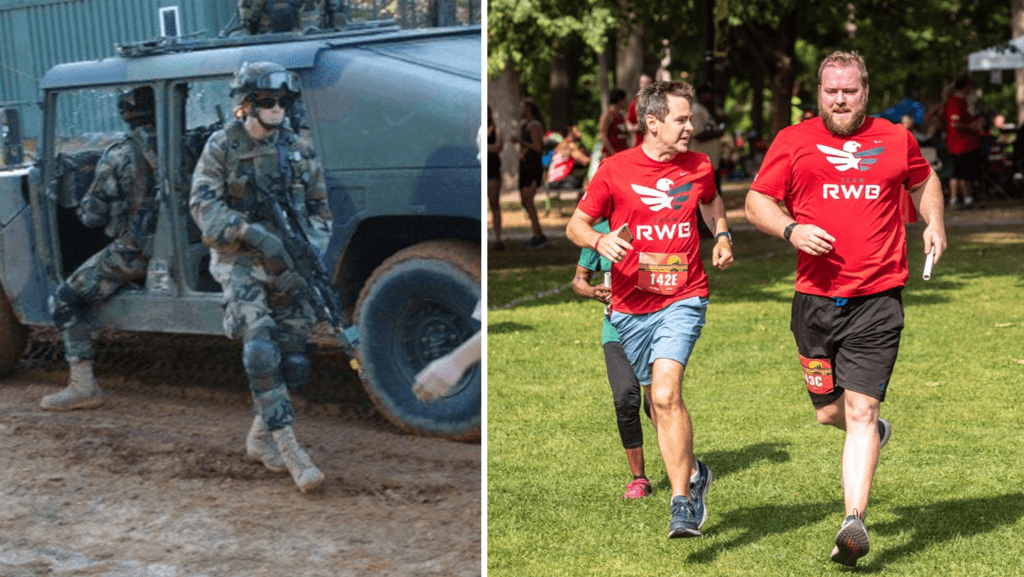 Staging as a Paramedic in New York City

On September 11, 2001, Tom Garrett was a paramedic based in Egg Harbor Township. At 9:03 a.m., he was called in as part of an “all hands” effort of paramedics requested to stage at the Giants Stadium in East Rutherford, N.J., expecting as many as 50,000 patients calculated based on the fact that the attacks occurred during the morning rush in Manhattan.

Garrett recalls that during the hour and 47-minute drive to the stadium, all of his colleagues – all “A-type personality medics” – were silent with the exception of checking equipment and reviewing mass casualty procedures. In 2001, cell phones were not equipped with the video technology they are today, which meant that Garrett and his colleagues had not seen any video of the attacks – all information had been relayed by phone and radio.

“I remember thinking that this is what the staging areas for D-Day or some of the other gigantic military offensives must have looked like. All with the huge plume of smoke in the background,” said Garrett.

At the stadium, Garrett and his colleagues prepared to triage, treat, and transport patients until he was able to go back to Egg Harbor Township at 3:00 a.m. In Garrett’s perspective, only a small number of personnel were called into the city from their staging area that day and throughout the night. The 50,000 patients expected did not arrive. For Garrett and his colleagues, that indicated a difficult idea to process – there were few survivors and the local hospitals were able to care for the number of patients brought to them.

“On one hand we were thankful that our huge contingent of services was not needed. On the other hand, that meant that there was likely a very large number of casualties.”

Tom Garrett also returned on September 18 as part of a group of paramedics specifically assigned to the site. To this day, he does not refer to the site as “Ground Zero.”

Mike Harkins was an Army Reservist assigned to the Emergency Operation Center at Fort Benning, GA on September 11, 2001. When he was first informed of the attacks, he was working at the Columbus Regional Hospital and quickly headed to the server room where he watched the second tower fall on the news.

Harkins was immediately put on temporary active duty orders for 30 days and reported to Fort Benning that same afternoon. Soon after, those temporary orders turned into deployment orders and Harkins ultimately deployed to Kuwait with duty to Iraq, Afghanistan and Qatar in addition to playing a support role for units deploying to the Persian Gulf region.

On the 19th anniversary of September 11, Harkins wants Americans to remember those who gave their lives for others.

“From the Fireman running up the stairs in one of the towers to the Grunt, E-4 who never made it back to his wife and kids,” said Harkins. “Freedom isn’t Free, someone has already paid the price – we can at least remember them for a moment and not forget. Real History is learning from the past.”

Harkins will be part of the effort to remember by hosting employees for a small, socially distanced 9/11 Moving Tribute at his Window World Franchise. As a military veteran, it means a lot to  know that his company is supporting our nation’s veterans in partnership with Team RWB. 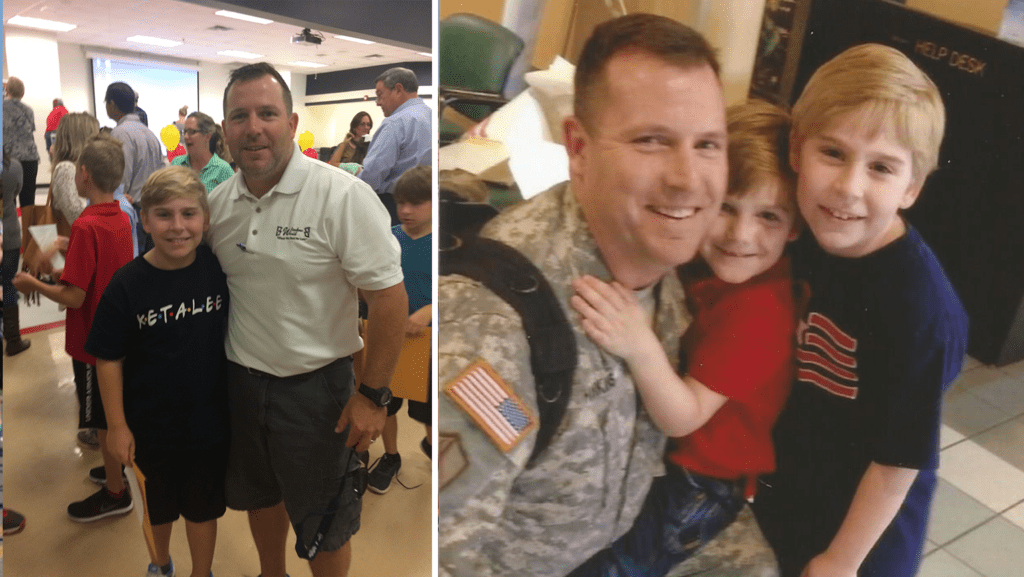 Answering the Call as a Guardsman

Team RWB Eagle Mike Ochs enlisted in the Army in 1992 and served on active duty until transitioning to the Kentucky National Guard to start college in 1997. He was deployed in 1993 to Kuwait, but deployed to Iraq twice in 2005 and 2011.

“The events of 9/11 strengthened my resolve and dedication to our country. I spent the following years preparing for multiple deployments and volunteered for various anti-terrorism and security training activities to ensure that I would make a strong, positive impact when called upon. To this day, I always strive to be the best version of myself and to maintain a high state of readiness,” said Ochs.

On September 11, 2001, Ochs was visiting New York City with his wife. After hearing news of the attacks, he answered a call to report to the Central Park Armory to report as a Guardsman. His wife, a licensed practical nurse, also joined him. Throughout the day, Ochs took accountability of ironworkers, identifying them so that they could respond to ground zero for survivor recovery. He also answered calls while a command post was being established for disaster recovery operations.

By late afternoon, Ochs transitioned his responsibilities to local military personnel once they were assigned on military orders, and the need for his wife’s support as a nurse diminished with news of few survivors. When the couple got back to their hotel, they went for a walk through a vacated Times Square and had a quiet dinner reflecting on the day.

“Preceding generations reflected upon Pearl Harbor and other significant periods in the history of our country to learn from. We should definitely do no less with the remembrance of what happened on 11 September 2001. America and our way of life is worth defending at all times,” said Ochs.

Ochs continues to serve as a member of the Kentucky National Guard today. On September 11, he’ll join his local Team RWB chapter to be part of a 9/11 Moving Tribute. He encourages all Americans to join in.

“Remember 9/11 in the best manner for you based on your circumstances. No matter how big or small, remembering the events of 9/11 and what has come from it is critical and should not be forgotten.” 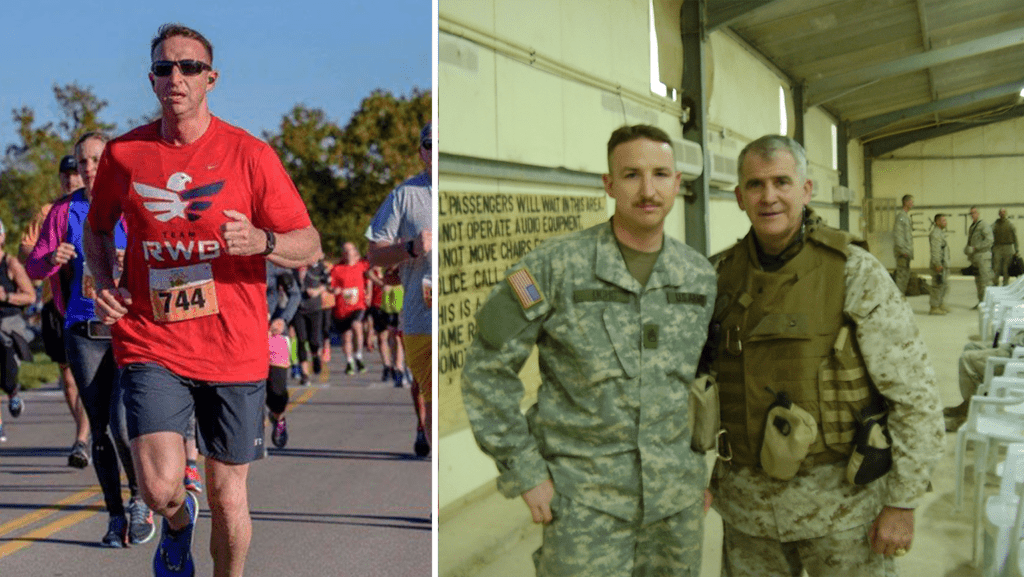 Though he didn’t know it on September 11, 2001, the attacks on the Pentagon and World Trade Center would affect Jared Heinz’s life and military service.

As a Marine Corps Reservist, Heinz deployed to Iraq in 2009-2010 as part of Operation Iraqi Freedom. As most military families know, deployments never come at “the right time”, and this deployment coincided with the same year he opened his first Window World store.

On the 19th Anniversary of September 11, Heinz will host employees at his local store to walk and run with American flags in tribute to the lives lost that day and the service members who gave the ultimate sacrifice.

“As a franchise owner for 12 years, it has been great to see the relationship and support that Window World has with veterans organizations and their commitment to serving and recognizing those who have served. The partnership between Window World and Team RWB in remembrance of the fallen heroes due to the September 11th attacks is another reason I am proud to be a Window World franchise owner,“ said Heinz.

When asked why it’s important for Americans to remember and preserve the memory of September 11 and the wars that followed, Heinz shared the belief that today’s veterans need the support of their communities.

“Many veterans tend to wear their service in many different ways, tattoos, clothing with their service branch on it, a logo on their vehicle; we don’t do this to show off our service; we do it because that time in our life was monumental and we want to make sure the heroes that were not able to make it home will always be remembered. When thanked, we often answer with ‘thank you for your support,’ which is precisely what today’s veterans need is the support of their family, friends, and community. Not all wounds are visible, and freedom is not free,” said Heinz. 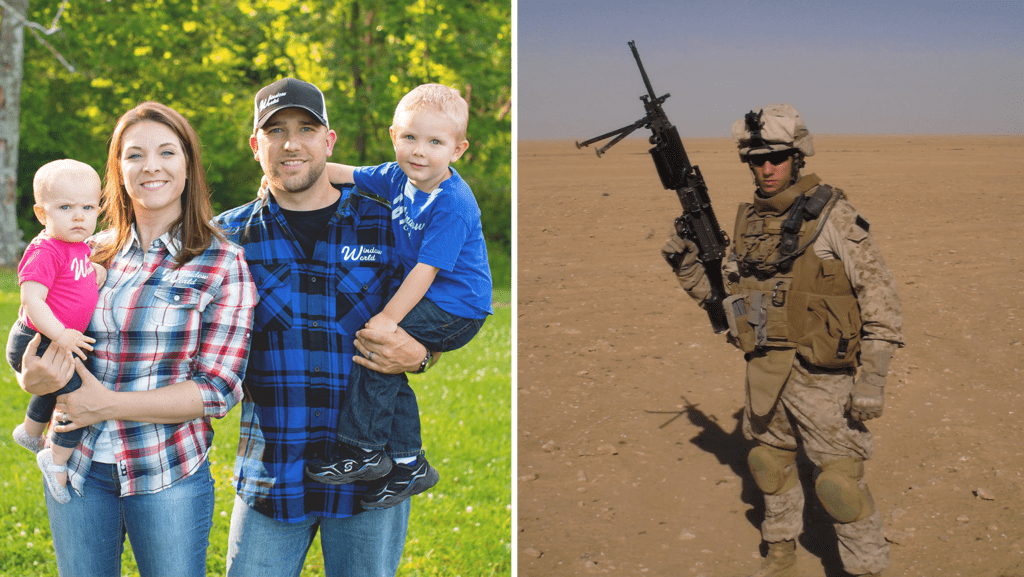 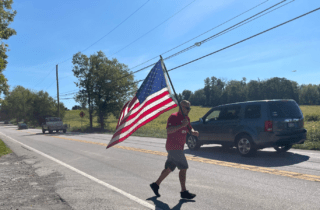 Old Glory Relay Moves Through Pennsylvania In Its First Week

Beginning at Ground Zero in New York City on September 11, the American Flag has traveled into Pennsylvania over the past week as part of … 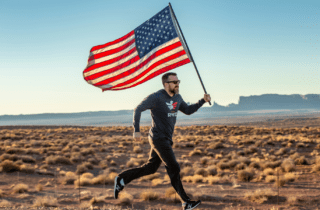 From September 11 through November 11, military veterans and supporters will run, walk, and hike side by side to carry an American flag from New … 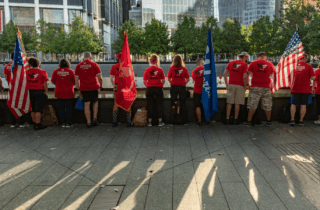 Military Veterans, Supporters to Move from Sunrise to Sunset on September 11

On September 11, 2021, thousands of veterans and supporters will unite in their communities, and virtually, to move American flags from sunrise to sunset as …

Old Glory Relay Moves Through Pennsylvania In Its First Week

Beginning at Ground Zero in New York City on September 11, the American Flag has traveled into Pennsylvania over the past week as part of …

From September 11 through November 11, military veterans and supporters will run, walk, and hike side by side to carry an American flag from New …

Military Veterans, Supporters to Move from Sunrise to Sunset on September 11

On September 11, 2021, thousands of veterans and supporters will unite in their communities, and virtually, to move American flags from sunrise to sunset as …