As the season of official gift giving winds down, I feel compelled to tell you (or anyone that might listen-lol) about one of the greatest gifts I have received this year: Team Red, White and Blue.

Team RWB’s mission is to enrich the lives of America’s veterans by connecting them to their community through physical and social activity. I wish I could tell you that I became involved with Team RWB so I could support veterans, but for me it was the other way around – a veteran reached out and supported ME.

My fitness journey, like so many others I know, has had its ups and downs. A year ago I was considering weight loss surgery because I had become so discouraged with my efforts. Then I got a dreaded call; my husband, a career firefighter, had been injured at work. He received a concussion and an injury that required surgery. While I was grateful his recovery was assured, I had a mortal moment while taking care of him…I HAD to start taking better care of myself. I confided in a dear friend (coincidentally – a veteran) and joined a gym. We met three times a week. I went no matter how I felt, and many times thought it was pointless! Through the snow, slush and rain, I showed up. He had me start a food journal and text him whenever I went to the gym.

Fast forward to May of this year. I was ready for my first 5K, but felt SO self conscious because I was “only walking.” I even emailed the race director (another veteran…from Operation Vet-Fit) and asked him point blank, is it okay to just walk? His reply was an enthusiastic – yes! So there I am on race day, surrounded by American Flags and Team RWB shirts, I was terrified of this exercising in public thing. A young veteran (whom I’ve known since he was a Cub Scout) was standing behind me in a Team RWB shirt. When the race gun went off, he didn’t move. When I asked him what he was doing he said, “Mrs. Landwehr, I know how hard you’ve worked these past months to get here, so I am going to walk it with you, if that’s okay.” So he and his girlfriend walked the entire race with me, carrying the American flag. I came in dead last with my friend by my side, and a bunch of people I didn’t know were cheering for me! I can’t describe the sense of accomplishment I felt, and how amazed I was at the sense of community among this tribe of eagle shirts. 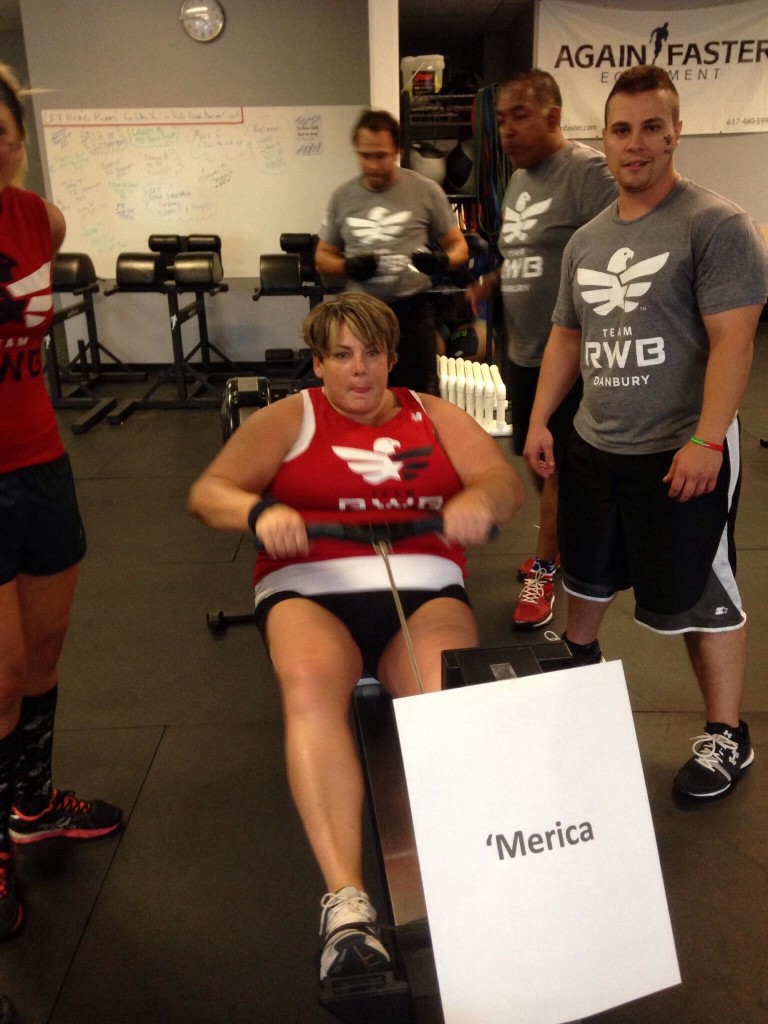 I volunteered at RWB Danbury’s next race to take pictures, and to further check out these Team RWB people. When I asked if they would be going to the Tunnel to Towers 5K in NYC, which was my next race , they said, “Start a team Sue Ellen…” Huh? Me? I’ve never been a team captain. Well, there I was in NYC rocking the Eagle with 20 folks from RWB Danbury. Unbelievable!

So, in closing…2013 = 2 x 5K’s, a Rowathon, Spinning, Pilates, CrossFit, Yoga, Equine Therapy, and let’s not forget Country Line Dancing…What!? I forgot to mention that I’m now the Social Director for my chapter, and that was my first official social event for Team RWB Danbury. How did I accomplish these things this past year? The gift of Team RWB. A veteran SUPPORTED me, followed by more Team RWB folks who worked with me at MY fitness level, EMPOWERED me to lead, and provided a COMMUNITY to make it all happen. Not too bad for a girl who started with ten minutes on the treadmill last November:) Team RWB Civilian + Veteran = everybody wins.