I Almost Gave up on Team RWB

I Almost Gave up on Team RWB

I almost gave up on Team RWB, but I’m so glad I didn’t.

I still don’t know how it happened. I was an athlete. A soldier. That all changed after I left the Army. I still remember the day it hit me. I was sitting in my living room, looking at a photograph of me and my family standing around the Christmas tree. I didn’t recognize the guy smiling back at me. How did I gain so much weight? It was at that moment that I realized I had been making excuses and blaming my injuries. I was feeling sorry for myself. Fifty pounds later, I realized that was enough.

I started taking control of my life again by joining Weight Watchers. A few months later I was down 65 pounds and had renewed energy. I never enjoyed running while in the Army, but with the weight loss, I grew to love it. Running not only burns calories, but it also helps relieve stress. Not long after I started running regularly, I decided to sign up for a 5k race on the 4th of July.

After I finished the 5k, I heard about a 10k the next month. I finished that race and then looked for something longer. I ran my first half marathon two months after running my first race ever. I was hooked. The one thing missing was that I trained and ran alone. I missed being part of a team, so I joined a local running club.

It’s amazing what a person can accomplish when they interact with others. My running club was so supportive, and I learned a ton from all the seasoned runners I now found myself training with.  I asked lots of questions and absorbed as much information as I could. But then I realized that only about a quarter of the club members ever showed up for workouts. If you paid your dues, you were in the club, and if you never showed up, no one really cared. 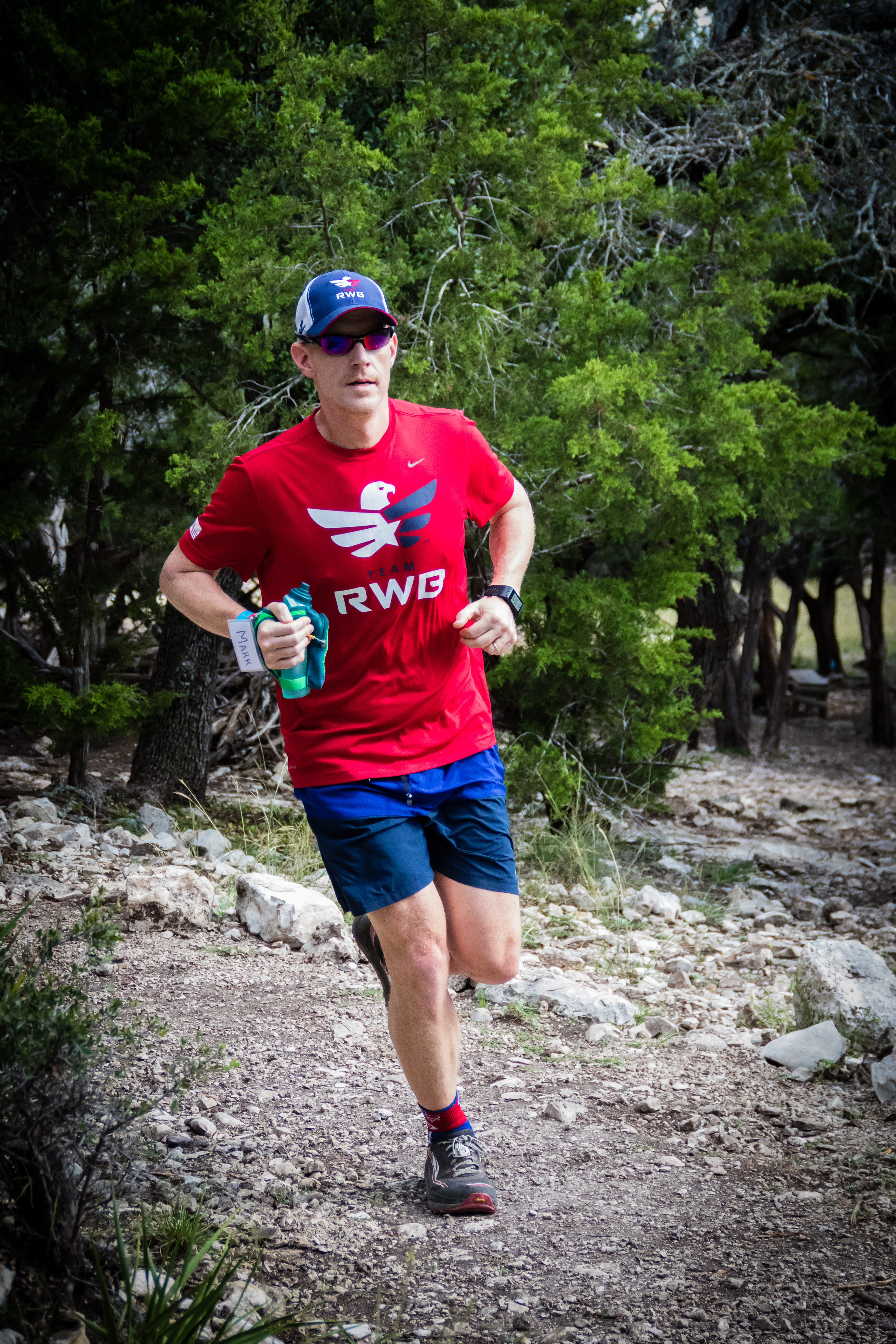 It was a chilly morning when I lined up to run the Detroit Half Marathon. The course starts downtown, goes over the bridge into Canada, and comes back into the United States through a mile-long tunnel under the Detroit River. Running past the Canadian border agents, I came off the bridge and headed back toward the river to run along the riverbank for a few miles. The sun was just starting to rise and was reflecting off the Detroit skyline. Then I noticed two guys wearing red shirts and carrying the American flag. They were slowly passing me on my left. When I got home, I immediately searched for Team RWB. Free to join. Not just for Veterans. Enriching lives. Sign me up. I thought maybe this was just the sort of team I was looking for.

I live about 50 miles north of downtown Chicago, and I don’t like to travel into the city if I don’t have to. When I joined the Chicago Chapter, I received a welcome email and was added to the weekly newsletter and the Chapter’s Facebook group. One week turned into two, and I still hadn’t seen any events near me. I went back to training alone. Months went by, and I still hadn’t joined my Team for an event. Then I read about the Soldier Field 10-Miler. Perfect.  Suddenly I had visons of running with my teammates, carrying the American flag out onto Soldier Field, where the Chicago Bears play their home games. When I arrived, however, my hopes were dashed. I was one of 20,000 runners, and I didn’t see a single other Team RWB shirt the entire race.

A few months later, I signed up for another race in downtown Chicago, only this time I decided to be a bit more proactive. I wanted to run with the flag, so I built a pole out of an extra piece of heavy electrical conduit. All I had to do was cut it to length and paint it white. I thought that even if I didn’t see any other Eagles, maybe they would see me with the flag. While the crowd cheered “USA! USA! USA!” wherever I was on the course, I still couldn’t find my Team. Where were these people? I thought maybe Team RWB wasn’t what it was hyped up to be.

The following week I learned that Team RWB was hosting a fun run along the shore of Lake Michigan followed by beach volleyball. My wife and I got up early and drove downtown, and it was there, along the lake, that we finally found some other Eagles. We talked before and after the run with each other, and I even met the chapter captain. I spoke to him briefly about my story and my experiences over the past couple races. He listened to me, and we talked about ways I might be able to get more active in the chapter. I recall driving home feeling that Team RWB was more than just a club. I decided that I needed to do more.

In the days that followed, I started to post invitations for other members to join me for a run in my home town. Slowly, I recruited more members from my area. It didn’t take long before the chapter captain reached out to me. We sat down for coffee one day, and we talked about the possibilities of me having more opportunities in my area. I was humbled by the news that I was already making an impact in the community. The captain asked me to be part of the leadership team. Hesitant to overcommit, I said that I would love to but that I had a stressful job. I wasn’t sure what level of commitment I could give. I was reassured that if I just kept doing what I was already doing it would be enough.

I continued setting up and leading events over the next few months and eventually became the chapter’s Veteran Outreach Director. Over the course of a year, I had a lot of positive experiences and a few challenging ones, too. Mainly I felt like I needed to do more, that I wasn’t doing enough. But at the same time, it was hard to juggle all my responsibilities. I know this is a challenge that many volunteer leaders face.

Early in 2016, I learned about an initiative called the Team RWB Eagle Leader Fellowship. It’s a year-long opportunity to work with leaders in your region and further develop your leadership skills. Soon after I was selected to be a fellow, I became the Chicago Chapter Captain. Thankfully, I have a very supportive wife, and the leaders around me helped make this process very positive. Throughout my fellowship, I even got to use my own experiences to better help chapter captains transition into their newfound leadership roles. 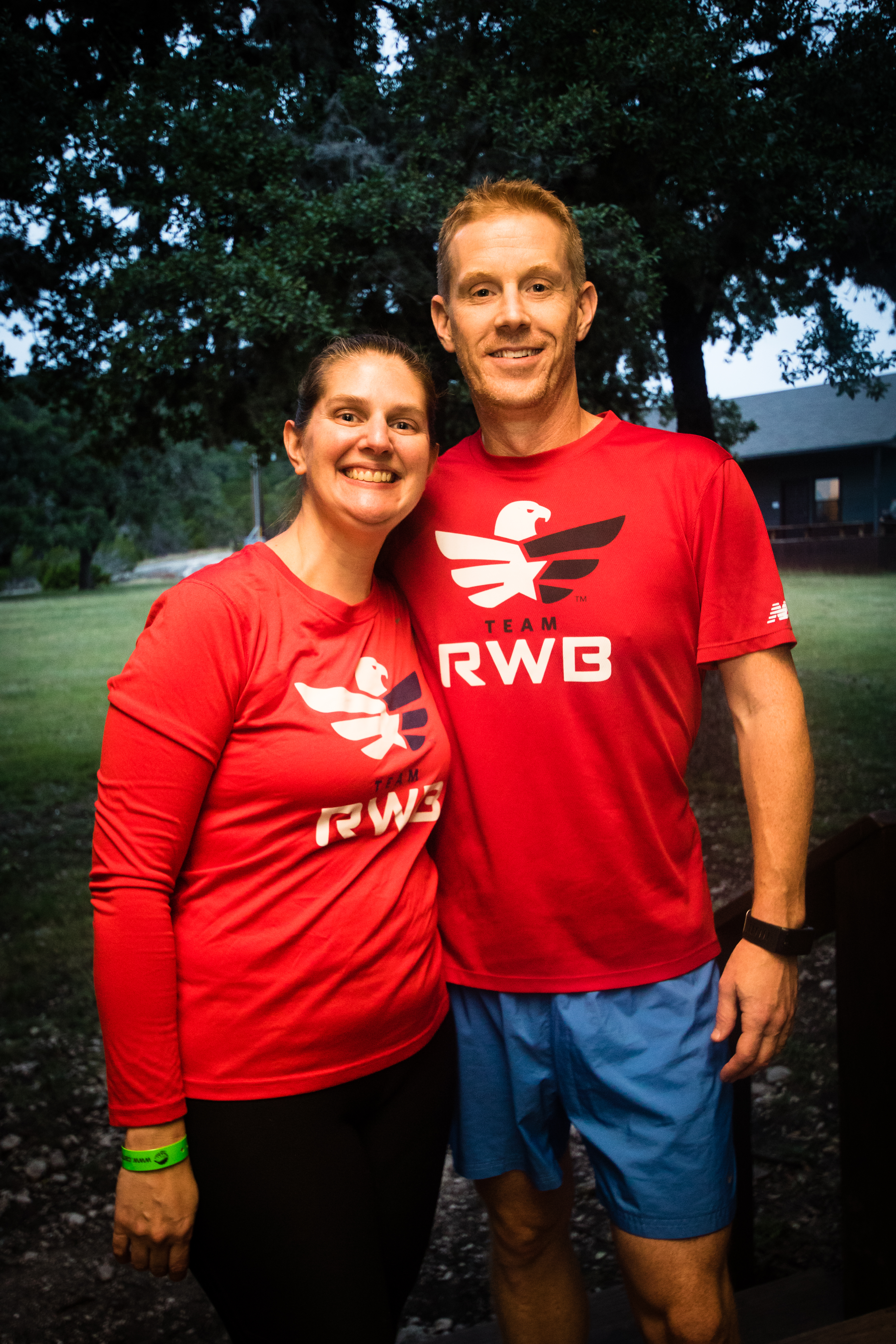 As part of the fellowship, I was also able to become a certified running coach with the intention to never charge anyone for my time. After I completed my training, I shared the details with my chapter and extended the offer to anyone who wanted my assistance. Almost immediately I had eight different members accept my offer to help coach them. And while their goals are very different, I have been able to offer the support and assistance that I wish had when I began running many years ago.

To think that I almost gave up on Team RWB before I was even a part of it is still hard to contemplate. When I first joined, Team RWB wasn’t what I needed it to be. The easy thing would have been to quit, to search for something else. The much harder choice was to stay and take action. I showed up, got involved, and slowly helped make Team RWB work for people like me. Along the way I learned some valuable lessons. Most importantly, I learned that life is too short to run it alone.