Confessions of a Team Red White and Blue Addict

Confessions of a Team Red White and Blue Addict

My support of the military began 14 years ago, shortly after the attacks on 9/11. The attacks took place on the second day of my internship at the White House.  Feeling a need to support the response effort, I volunteered to serve food to those cleaning up debris at the Pentagon, where I met another volunteer named Paul.  Paul and I both felt motivated to continue to provide some level of public service, but that desire initially led us in different directions.  I accepted a permanent position at the White House, and Paul directed his patriotism towards joining the Army. While I was honored to serve in the Executive Office of the President, I was also envious of Paul’s decision to serve in the uniform.

When Operation Iraqi Freedom began, I kept in touch with Paul while he was deployed to Baghdad. Hearing his stories made me want to contribute to the war efforts in some way, so I began greeting the evacuation flights that were coming to Walter Reed with the wounded. Then, one by one, Paul’s new military friends started moving to D.C. and he enlisted me to “take care of them.” That was trait number one that I noticed in all the service members who eventually became part of my life: loyalty. No one got left behind; no one thought twice about bending over backwards for each other. I was thrilled to be pulled into such a community.

My work with service members at Walter Reed, and my new friendships with Paul’s “battle buddies,” exposed more consistent traits in all of them: dedication, discipline, and resilience. I could not help but admire the ability of everyone to simply get the job done and not complain about it. Even the veterans I met at Walter Reed who were missing one, two, even three limbs were always positive, polite, and strong. I wanted to continue being around service members just so I could continue to see those traits. I eventually joined the Navy reserves to burrow even further into the military community I so admired.

My experiences at Walter Reed and with Paul and his military friends also taught me about the challenges veterans face when trying to integrate into civilian life, and about PTSD and TBIs. I found myself wanting even more to support those who might feel overwhelmed leaving the military, or who might just need a friend. I sought out volunteer opportunities with various veteran service organizations. Then, I saw a Facebook friend post about Team Red White and Blue (RWB) and I was immediately intrigued.

Not only was RWB an organization that brought together veterans and civilians for camaraderie in a practical, sustainable way, but it used physical activities to do so. I’m not naturally athletic, but I love staying active and I’ve been sucked into the running world since moving to D.C. I went to an RWB group run, then continued to show up for other events. I found myself rock climbing, participating in yoga classes, and doing service projects with the Team. I saw those traits that I loved in my veteran friends, show up in the Eagles I was meeting: a desire to go above and beyond, an inherent sense of duty to help, and the conviction that no one gets left behind. I saw these traits in both the civilian and military members of the Team, so I was hooked.

While I do call myself a runner, I’m a very slow, not very consistent runner. So I was intimidated at first to join RWB runs because it makes me uncomfortable for people to wait for me to finish. But then I saw the genuine desire in the Eagles to be there for one another and I finally allowed myself to be cared for at times. I distinctly recall one race in particular where a few of us admitted that we were slow and immediately another Eagle jumped in the Facebook discussion and said “If you all are running that pace, then I’m running that pace.” And I knew he meant it. And I knew it made him happy to do that. Seeing that kind of support carved a little memory crease in my brain that has given me motivation ever since. When I’m struggling in my own runs, or in a race, I think about moments like that and I feel the support of the Team even when I’m not around other Eagles. 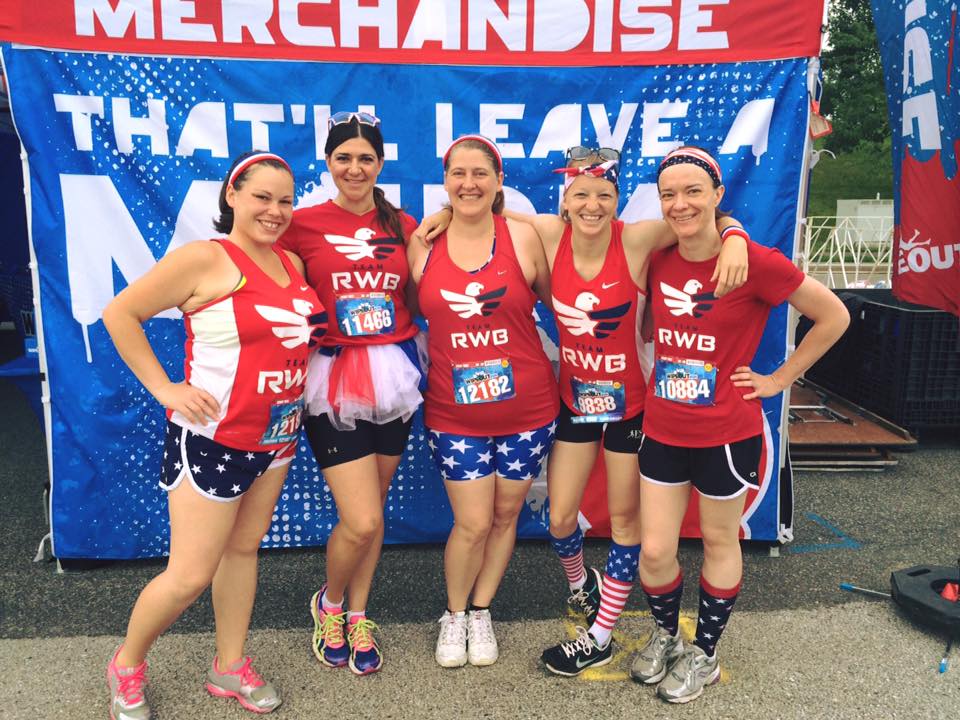 I wrote a book this year on my misadventures in being a slow runner, and RWB definitely had to be mentioned. While I was a runner long before I was an Eagle, joining the Team has encouraged me to do more training runs, and do more races – mostly because I just want to spend more time with RWBers. The Team has encouraged me to stay physically active, and has shown me time and again what it looks like to be there for the people around me. #EagleUp indeed.