We’re all familiar with the celebration of St. Patrick’s Day.  And what’s not to love about it?  Put on your old “Kiss Me I’m Irish” t-shirt from your younger partying days, watch a parade, and drink all the beer you can find.  It’s a day when everyone is at least part Irish (even if only in spirit), we celebrate the growth of Irish culture in America and the challenges overcome by past generations, and we collectively raise a toast to any tales or accounts of the 5th century’s “Apostle of Ireland” that we can recall from our childhood (or convincingly make up on the spot).  And with such a significant population boasting Irish heritage, Boston is surely a prime location for the holiday’s festivities.

But here in Boston, this day carries greater significance in our hearts and in our history.  Known as Evacuation Day, March 17th is an annual homage to a pivotal moment in our nation’s war for independence.

The turn of events began with the capture of Fort Ticonderoga in May of 1775.  A significant victory for the Continental Army, this also provided the army with an influx of artillery.  In November of that year the Knox Expedition embarked on the arduous task of moving approximately 60 tons of cannons and other armaments, through two months of harsh winter conditions, across some 300 miles of unforgiving terrain toward Boston.

The city had been under siege and occupied by crown forces fighting the strengthening Continental Army for 11 months.  But with this influx of artillery General Washington was able to fortify Dorchester Heights, which strategically overlooks Boston and its harbor.  British General William Howe found his positions indefensible and, due in no small part to the day’s sudden inclement weather, could not mount a sufficient force to counter Washington’s fortifications.  As a result General Howe ordered the evacuation of his troops from Boston and its waters and retreated to Nova Scotia.

This day marked the first victory for General Washington in the war, the end of the Siege of Boston, the first official liberation of a Continental city from the crown, and an unparalleled morale boost for the colonies.  The evacuation also prevented considerable loss of life from what was very near to becoming a terrible battle over Boston.  In Washington’s own words:

“Upon their discovery of the works next morning, great preparations were made for attacking them; but not being ready before the afternoon, and the weather getting very tempestuous, much blood was saved and a very important blow…prevented. That this most remarkable Interposition of Providence is for some wise purpose, I have not a doubt.”

With firmly grounded roots in our nation’s earliest military traditions, and with the descendants of those whose lives were spared that fateful day still living in Boston, this city’s annual St. Patrick’s Day Parade is a day to celebrate the heroes all around us.  Veteran groups and service organizations march the streets of Boston for hours in this beloved demonstration of honor and tradition. 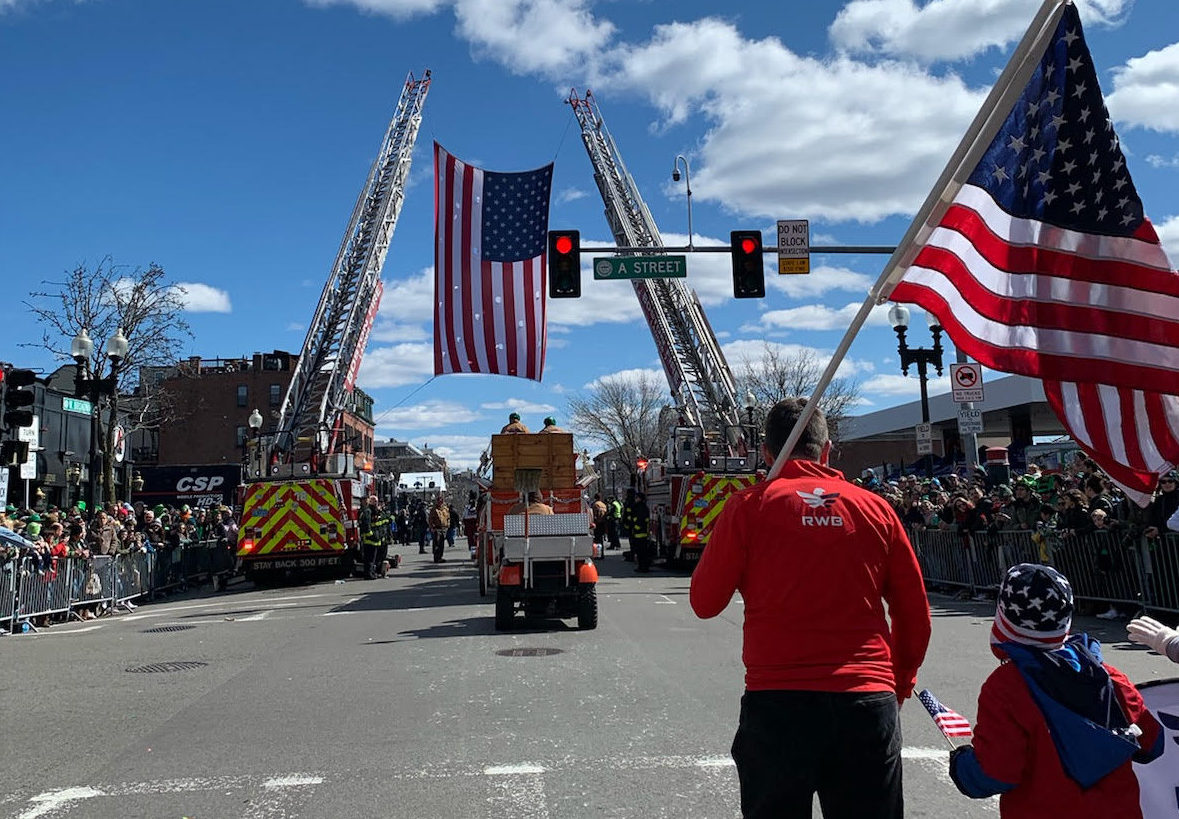 And it is with solemn pride that Team Red, White & Blue joined the celebration in 2019.  Led by the Boston Chapter’s Veteran Engagement Director, Jamie Boyd, a contingent of Eagles carried our flags and our mission through the streets of Boston.   We were cheered on by the drunk and sober alike, we waved and shook hands and hugged (and of course handed out RWB bracelets), and we even got in some push-ups any time the parade stopped for a few minutes.  What better way to spread our message of camaraderie and fitness to the day’s many spectators?

Should you ever find yourself in Boston on St. Patrick’s Day, the parade is a can’t-miss event.  Give us a shout and we’ll be happy to go with you!  But no matter where you are each year on March 17th, take a moment to remember history’s providence on that fateful day.  Evacuation Day was a turning point on our road to independence, fought for and earned by many of our nation’s very first veterans.

During Black History Month, Team Red, White and Blue (Team RWB) honored the accomplishments and recognized the challenges of Black service members and veterans. Those …

During Black History Month, Team Red, White and Blue (Team RWB) honored the accomplishments and recognized the challenges of Black service members and veterans. Those …