Even the Rain Can’t Stop Your #InnerWild

Even the Rain Can’t Stop Your #InnerWild

It’s hard to put into words the sleep deprivation, sensory overload, and powerful Eagle Fire that culminated at the Ragnar Trail Relay in Windsor, VT on August 3-4, 2018.  I guess the T-shirts say it best… “Run. Camp. Sleep? Repeat.” 6 states, 4 teams, 3 trails, ’round the clock relay until each runner has completed all three trails. Rain or shine. When registration first opened, I signed up to be our team’s volunteer. I don’t run trail, but I definitely wanted to be a part of this adventure with my fellow Eagles. Each team of 8 is required to provide a volunteer to do at least one work shift, which helps staff the event for everything from garbage management to trail crossing guards.

As the event grew near, I could feel the nervousness increase amongst our Eagles as everything from footwear choices to training was getting inside their heads. But in the end, excitement over the competition trumped the nervousness. No backing out now. It’s Ragnar time. Let’s do this!

First up was gear drop off. When I first turned into the drop area, I saw the sea of tents going up and all I could think was, “This is gonna be epic!” What started out as an empty dirt parking lot was growing  into a thriving, vibrant city right in front of me. After getting my gear in order, I headed up the hill to the second level where the operations center was. The ops center area was a hub of activity until long after dark. Thursday it was a dark clear night which was perfect for the fire pit, s’mores, dancing to the DJ’s tunes, and a movie screening. Fierce competitors joining in a night of fun together before race time.

And then came the rain. Literally. Hard, fast, constant. Water dumping periodically from overloaded canopy roofs, the campground beneath the tents turning to little rivers and mud. It definitely put a damper on everyone’s moods and sleep didn’t come easy. Early Friday morning, the rain turned to a drizzle, fog hung over the event, and everything was wet and slippery. Some attended the yoga class on the slope to limber up. and others did muscle stretching in their tents. Runners and volunteers started checking in. Spectators started to line the start/finish line and the top of the first hill of the courses. All of a sudden, it was race time and waves of runners attacked the trails to the cheers of their peers.  The rain had taken it’s toll, making the trails muddy and slick, which in turn reduced the runners’ paces. But they gave it their all despite the adversity thrown at them.

A two hour lightening delay Friday mid afternoon threw scheduling out the window. Runners who were staged, hydrated, carb loaded, now had to wait two hours before their laps. The Eagle Fire never wavered. The trails were mud bogs, the runners legs covered with muck, sox saturated with water, and shoes invisible under the dark soil coating. In the end, the teams persevered, endured, gave their all, did their part, completed the event to Ragnar’s satisfaction, and got their medals. I couldn’t have been more proud watching my friends with their Ragnar medals linked together. Amazing people doing amazing things, forever bonded by the event they said was both “bad and awesome.” They are true Ragnarians. 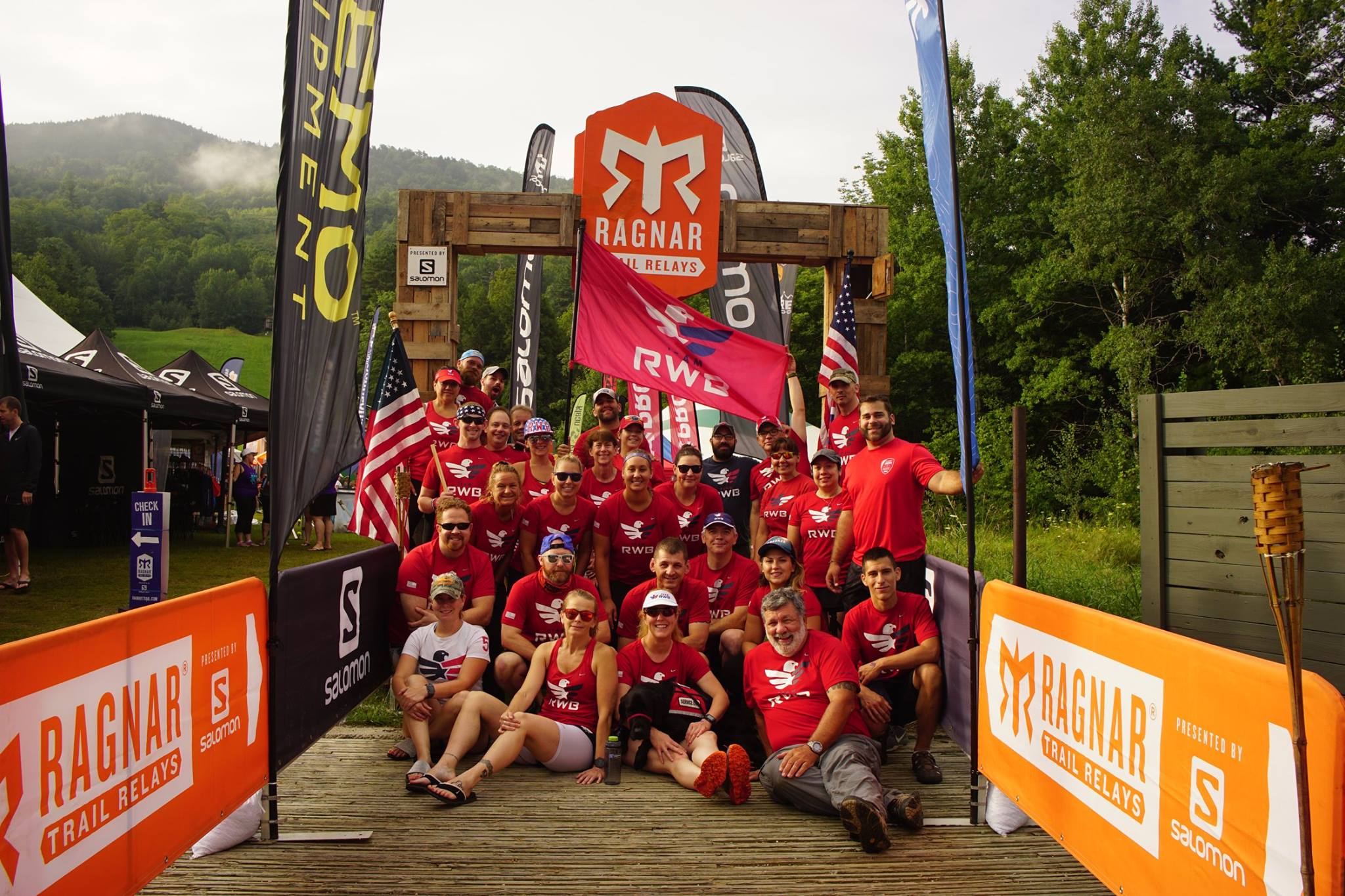 I saw unparalleled cross-team camaraderie and support within the Team RWB campsite. Although many had never met before this event, you could see that we were four teams on paper but we were one in spirit. I saw some individuals successfully push themselves past their own perceived limits, and others savoring the experience regardless of the pain endured. At a higher level, I watched what started out as 150+ teams all in it for themselves (to win!) transform into one band of runners, cheering for each other, supporting each other in what had become a game for survival.