At Team RWB we are extremely motivated about fitness, creating connections and engaging veterans within their communities. That’s why we’re so excited to announce our second annual Old Glory Relay, presented by Microsoft. Beginning at sunrise on September 11, Old Glory will be unfurled in San Francisco and begin a 60-day, 3,540-mile journey across the nation to end at sunset on November 8 in Washington, D.C. 59 teams of runners will move Old Glory throughout the course, passing through the hands of one patriot at a time.

Team RWB started in 2010 as a grassroots movement with a simple objective: to encourage veterans to remain active and connect with their community through physical and social activity. Through early member involvement with organized runs, marathons and triathlons, we figured out something amazing. People all over this country are truly inspired by the sight of an individual running, hiking or walking with Old Glory. And the Old Glory Relay was born.

We’re proud to say that 87 cents of every dollar that is donated to Team RWB directly impacts chapter events and programs that enrich the lives of veterans in our efforts to bring together military and civilian communities. When the Old Glory Relay kicks off on September 11, each day will begin with the American flag being unfurled and entrusted to the day’s first runner and will end with the last runner folding the flag and storing it for safekeeping overnight. During the relay, the flag will be passed from runner to runner along a pre-determined route, with no less than 50 miles traveled each day.

If you’re interested in getting a glimpse of the Old Glory Relay from last year, check out this video:

The theme of this year’s relay, “Faces of Old Glory,” is a call-to-action for participants and supporters to share their stories of what Old Glory means to them. Veterans and civilians alike have stories of family members, friends, colleagues and even their own personal journeys that have helped shape and define who they are as individuals. We look forward to hearing and sharing these inspiring stories. Participants can also enter for a chance to win prizes such as a Microsoft Surface 3 or Microsoft Bands by submitting their personal “Face of Old Glory” photo or video while attending a Celebration, using #OldGloryRelay on Instagram, Twitter, YouTube, Google+ or on the Team RWB Facebook Page. The Faces of Old Glory Lottery prizes are presented by Team RWB, courtesy of a generous donation of Microsoft Products by the Microsoft Military Affairs Team.

This year, the Old Glory Relay is presented by Microsoft, who is supporting with Surface 3’s and Microsoft Bands for Team RWB and is also hosting the relay at select Microsoft Store locations along the route. These “Community Course Celebrations” are designed to engage communities along the course, with a broader effort to inspire the IT industry to come together to open doors to careers for veterans and embrace the talents they have to offer. “Team RWB has proven that engagement between veterans and their community is critical to supporting the transition from active duty to civilian life. Approximately 1 million service members will retire or separate from the military over the next five years, so raising awareness and critical funds for Team RWB and the veterans it supports is more important now than ever,” said Chris Cortez, Vice President of Military Affairs at Microsoft.

As a part of our launch, the tech community will stand together in San Francisco and Silicon Valley to honor the sacrifice of thousands of Americans who have fought for Americans’ freedom and make a public display of support for America’s veterans as they return to their communities. Below is a map of our first day of running through the Bay Area: 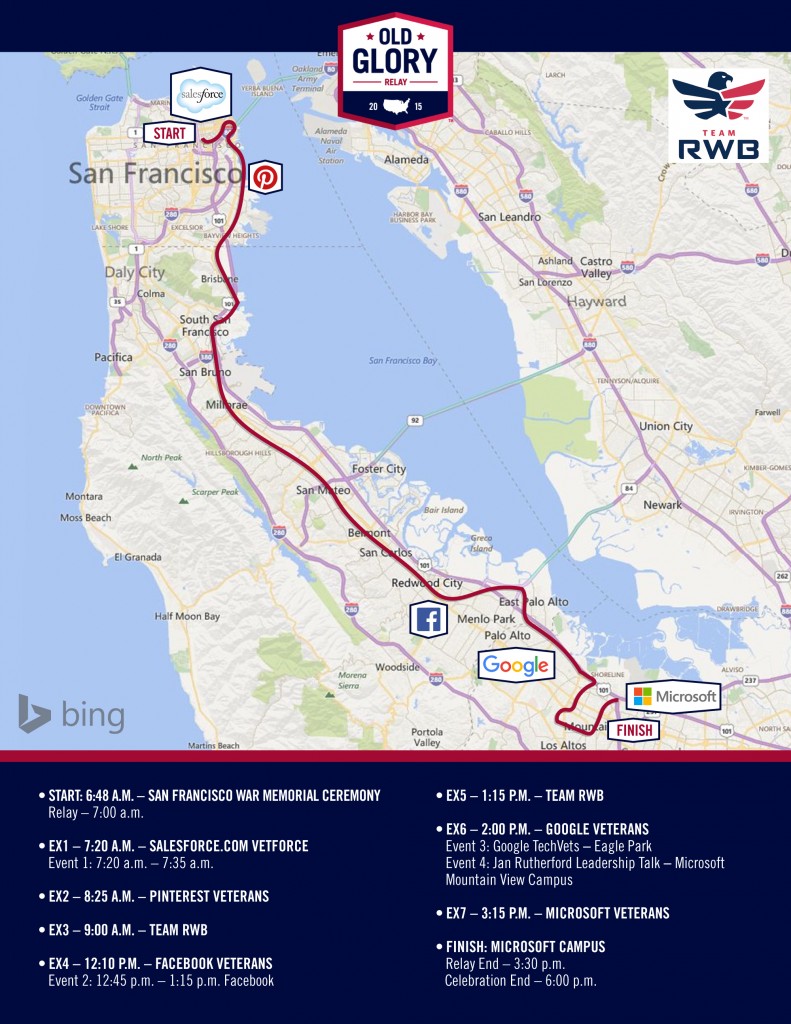 Closing the day on September 11

Finally, we wanted to draw attention to a few special events that will be taking place at the end of the day on September 11:

Google TechVets have been pivotal in supporting the local Team RWB efforts in Mountain View in fundraising and planning for the Mountain View Veterans Memorial. During a short ceremony at 2:00 p.m., a special flag will be presented on behalf of Google TechVets, Microsoft, and Team RWB to the President of the Mountain View Veterans Memorial Community in order for it to be used during the official dedication ceremony for the Memorial on Veterans Day 2015. This flag was flown into an active combat zone by the airmen of the Ninth Airlift Squadron, Dover AFB, DE and will accompany Old Glory in the relay.

At the close of the ceremony, Google TechVets will pass Old Glory to the Microsoft Military Affairs Team for the final leg of running of the day. Concurrently, Microsoft will host a Tech Talk with speaker Jan Rutherford on the Microsoft Mountain View Campus beginning at 2:00 PM. Rutherford spent six years in Special Forces as a medic and “A” team executive officer, and three years as a military intelligence officer. He is founder of Self Reliant Leadership, a leadership development firm focused on helping leaders and teams develop self-reliance to create powerful results through workshops, custom programs, coaching, and wilderness expeditions. Rutherford will offer insight to all supporting organizations of the Old Glory Relay on leadership and bringing together military and civilian communities.

As Jan Rutherford’s talk concludes at 3:30 p.m., the audience will be invited to move outside to welcome the arrival of Old Glory to the end of Day 1. Upon arrival, the Microsoft Military Affairs Team and Team RWB will complete a formal Daily Retreat Ceremony where leaders from both teams will offer a short message to recognize all the veterans of Silicon Valley.

We can’t wait to kick off the relay and hope you can join us to support veterans everywhere. For more information about the race and to see the full course in detail, visit oldgloryrelay.org. 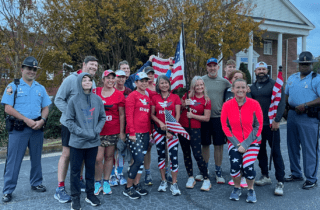 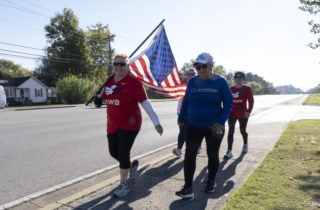 The Old Glory Relay is in the final stretch, with only two days until the finale in Atlanta! The flag has traveled over 2,300 miles … 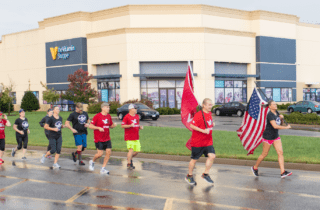 Team RWB’s Old Glory Relay is more than halfway to Atlanta, covering over 1,600 miles to date!  Along the route, Eagles have made several stops …

The Old Glory Relay is in the final stretch, with only two days until the finale in Atlanta! The flag has traveled over 2,300 miles …

Team RWB’s Old Glory Relay is more than halfway to Atlanta, covering over 1,600 miles to date!  Along the route, Eagles have made several stops …