Living on the Edge, Literally and Figuratively

Living on the Edge, Literally and Figuratively

After nine years in the Army I was faced with the decision to continue to 20 years or to ETS.  Wearing the uniform made me feel important and I knew that I was making a difference but I also had a desire to be a good mom so I made the decision to leave the Army in 2006.  Over the next eight years I struggled with depression, anxiety, drug and alcohol abuse and feelings of inadequacy.  Though I sought help for my addiction and enrolled in school, I still felt hopeless and could not find joy in my life.  I had also given up on PT and the good that staying active does for your mind and body.

I first heard about Team Red, White & Blue in 2014 through an old Army acquaintance.  In May of last year a co-worker encouraged me to come out to a weekly event and BBQ.  At that BBQ there were just enough of us to make a leadership team so I decided my best option, ironically enough, was to become the Social Director.  Even with my social anxiety, I figured that would require the least amount of work in dealing with people on a regular basis.  Additionally, I was also finishing up my Master’s Degree and I knew I wouldn’t have a lot of time to dedicate to both, so a once a month commitment looked pretty good.  After finishing my MBA I really needed something to fill the gap. It was at that time that I really started getting more involved.

Even though I was more involved in Team Red, White & Blue I used my weight as a crutch to stay away from doing certain things that made me uncomfortable – like running again.  At one of our Saturday morning runs I started talking to one of our civilian members who introduced me to interval training.  That friend lit a fire under me that has been fueled by a group of teammates that take me hiking and running, from 5 to 10k’s all the way up to a half marathon this October.  These people love me unconditionally and encourage a healthy lifestyle with accountability, which is something that I thrive on. 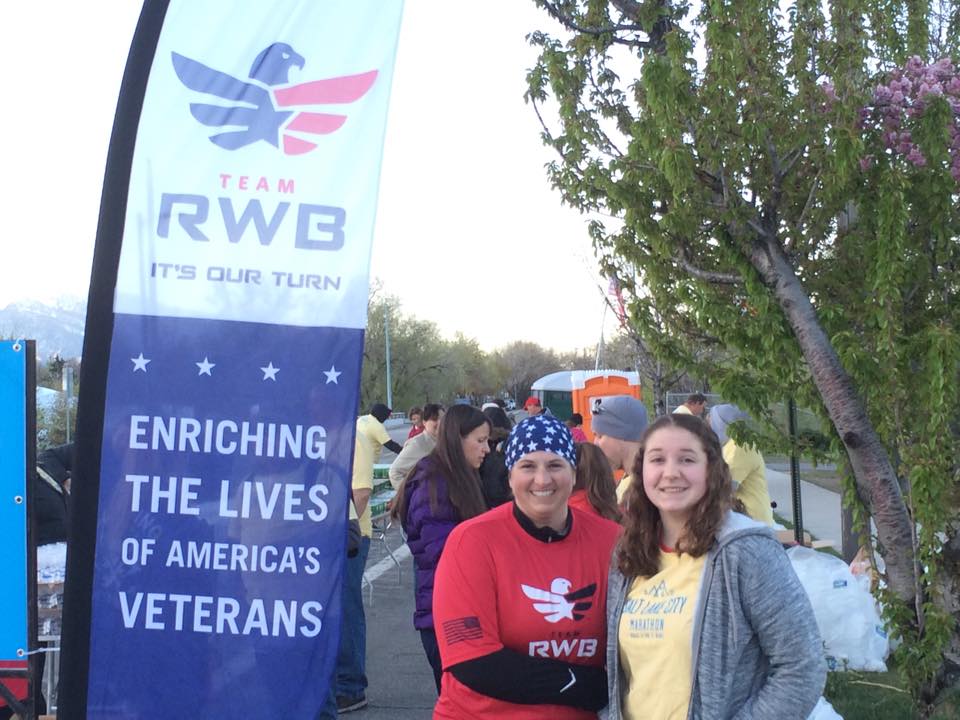 Last month Andrew Hutchinson notified me that I had been accepted to the Team Red, White & Blue Rock Climbing Camp.  I was both thrilled and terrified at the same time.  I even wrote him an email explaining to him that I was a bigger girl and was worried that there wouldn’t be equipment that would fit me.  He said not to worry because there would be people of all skill levels there.  I was still worried though that when I got to camp there wouldn’t be a harness large enough to fit me and then I would be horrified and embarrassed in front of everyone.  I would also have to get over my issues with meeting new people, in addition to trusting them with my personal safety while I climbed.

My fears and anxiety dissipated quickly after the first evening when lo and behold they had a harness that fit me.  I also learned that several other people had fear and social anxiety, which helped me to know that I was not alone in being terrified to meet and trust new people.  Now I just had to get over the fear of actually climbing.

After several beginner climbers had gone it was almost time for me and I was becoming increasingly uncomfortable.  Then, Brennan Mullaney came over and said, “hey, I have a couple of climbs over here for beginners if you want to come and try.”  I was able to climb two times that day, both easier walls, but challenging to a first-timer. I was filled with overwhelming emotion after coming off the wall and looking around at all the beauty surrounding me and the other climbers. I almost felt foolish at the time but I began to feel so empowered that I wasn’t going to let my weight get in the way of enjoying my life anymore.

We were also treated to leadership classes and a presentation by Tommy Caldwell, which got me fired up.  They were better than I could have ever expected. The thoughts that keep resonating with me are based on something JJ Pinter said, “Veterans are not victims so don’t let the five, nine or ten years that you served be the only thing good that you do.  We have a long way to go with a 90 year life expectancy to still do great things.” I have spent a lot of time over the last few years looking back and thinking that the military was the only good and notable thing that I had ever accomplished.

I can’t say enough about Team Red, White and Blue and the programs that it offers.  I would have never had this type of Rock Climbing experience without it.  The leaders and volunteers in this organization truly have a passion for the Eagle Ethos and want to share it with everyone, not just veterans, but community members as well.  Team Red, White & Blue is about connecting veterans to their communities, and that is what saved me.  My depression and anxiety has diminished to a manageable level and I am actually getting out of my house and participating in events with groups that I would have never even considered a year ago.  Team Red, White & Blue gave me exactly what I needed at exactly the right time.  I only wish I’d given them a chance sooner.

Andrew Hutchinson highlights how these camps facilitate these types of experiences for our members.  “The cornerstone of the Team Red, White & Blue mission is to enrich veterans’ lives. We define enrichment as creating quality relationships and experiences that contribute to life satisfaction and overall wellbeing. One of the programs helping us achieve this is our Veteran Athletic and Leadership Camp (VAC) Program. The VACs are tremendous opportunities for veterans to learn a new activity that they can take home to their local chapter in a leadership capacity or as a highly active community member. They are led and coached by world-class athletes and renowned experts and are built to inspire veterans to commit to their own health and fitness. Camps are an investment in the member, the organization, and the community. The goal is for every camp attendee to possess the tools and motivation to return home and make a positive impact in their local community.”