My name is Anna Thompson, and I am the Athletic Director for Team RWB Dallas/Fort Worth.  There are all sorts of stories that inspire me; it is my hope that sharing my story will inspire others to challenge what is “possible.”

Athletics have always been a part of my life, but I am by no means a “natural” athlete.  From a very young age, I realized that what I lack naturally could be made up with hard work.  I had a family and teachers that supported this belief, and encouraged me to use my competitive spirit to better myself and create opportunities.  I was a three sport athlete in high school, and was blessed with the opportunity to play softball in college.  I was a traditional “team sports” athlete and certainly NOT a runner!  In fact,about half-way through my final season during my senior year of college I tore my left meniscus, and had a lot of problems following what should have been a simple knee surgery.  After a few months of rehab I was told that I’d be lucky if my knee lasted a few more years, and that I should expect a full knee replacement before my 30th birthday.

After graduating from college with my Bachelors of Science degree in Physical Education, I met and married USMC Sgt. Anthony Thompson, and we began our family. I have several family members that have served in the U.S. Army and U.S. Air Force, so marrying a Marine only reinforced my commitment to supporting our nation’s military.  Fast forward several years – we moved to Texas after Anthony served eight years in the Corps, and we had 3 children (2 girls & a boy).  Anthony and I both continued to be committed to an active lifestyle, but after the birth of our son, my “same old” workouts weren’t achieving the results I wanted to see, and a friend challenged me to do a triathlon.  I had never heard of sprint triathlons before, so I was immediately intrigued – I trained for and competed in my first triathlon a little over five years ago when my son was eight months old.  I instantly was “hooked” on the sport, but the run was challenging for me.  Despite being very proud of finishing with a smile (always my number 1 race goal), I wanted to improve.  A couple months later, I decided the best way to improve was to challenge the capability of my knee, so I signed up for a half marathon.  I had my gait analyzed, followed the recommendations for a better shoe, and began training.  To my pleasant surprise, the more I ran, the less my knee hurt, and the more I enjoyed running!

From July, 2008 to February, 2012 I competed in approximately 60 races – combinations of distances ranging from 5K’s and sprint tri’s to full marathon distances.  I wasn’t out winning races, but I loved racing, and was pretty competitive in my age divisions.  On the morning of February 26th, 2012 I was driving to run a half marathon, and was involved in a motor vehicle accident when another car lost control and came in to my lane.  I hurt my back pretty bad, and went through several months of outpatient surgical procedures, and 19 months of physical therapy.  I kept asking my doctors and therapists if and when I could return to running and kept hearing that my running days were over, and to pick another activity.  The year following the accident was the most difficult year of my life – I struggled with chronic back pain (something I had never dealt with before), I was depressed and finally reached a breaking point.  I had to decide whether the injury was going to defeat me and change who I was, or whether I was going to make the conscious decision to overcome this new challenge.  I decided that my back was no longer going to dictate my life.  I would deal with the pain, but getting back to myself – getting active, was the only thing I knew that could psychologically and emotionally make me feel better.

In January of 2013, Anthony and I were looking to get involved in a community-based veteran support organization and we came across Team Red, White & Blue.  We both joined, and I made a decision to do whatever it took to try to return to my previous activity level.  In February, 2013, one year after the accident, I completed my first 5K and half marathon on back to back days at the Cowtown.  I didn’t really train for the races the right way, and so my back hurt every step, but I was determined to finish both days, if for no other reason than to try to find some closure to the previous year’s misery.  I ran with Old Glory for the first time with Team RWB, and met some incredible people (thank you Major Silk, Paige Dunn & Georgina Biehl) who truly inspired me.  I had to have a pretty major shoulder surgery a couple weeks later, but ran a trail 5K the day before the surgery and another half marathon less than 2 weeks after the surgery, still wearing my sling!  I started running regularly and became less focused on finish times, and more focused on how much better I felt being regularly active again – I started seeing the value in small steps of progress.  I was a LOT slower, but I was moving, despite having been told I may never run again.

I began to wonder if running long distances could be possible again, so when the opportunity came up to run the Marine Corps Marathon, I committed to a training plan, and set a goal (finish with a smile)!  In 2012 I had watched as Anthony finished his first marathon in Washington D.C. at the MCM.  The thought of us finishing together in 2013 inspired me every day as we trained throughout the summer and fall months.  I had some struggles along the way – IT Band issues from hip/core weakness resulting from the herniated disc in my lower back, and ongoing issues with my left shoulder following the surgery.  I have had the opportunity to run alongside true American heroes throughout this year with Team RWB. They inspired me, and made me realize how truly blessed I am to be putting one foot in front of the other, mile after mile.  I’ve competed in 16 races with Team RWB this year and have proudly worn the Eagle and carried Old Glory with me to race after race. 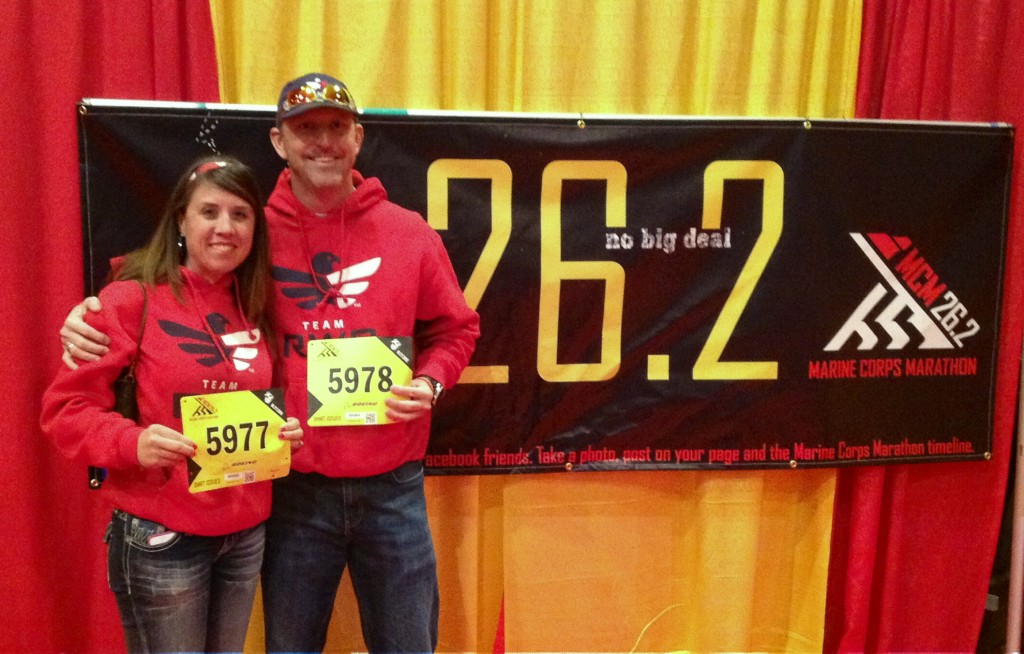 I carried Old Glory with me as I ran in this year’s Marine Corps Marathon.  I’d never carried her more than a half marathon before, but I wanted the colors of the land I love with me as they have been this entire year.  On October 27th, 2013, with Anthony at my side and Old Glory in my hand, we crossed the finish line at the Marine Corps Marathon together at 4 hours & 36 minutes.  Twenty months after the accident that changed my life, I proved to myself and hopefully to others, that anything is possible when you commit to a goal, get your heart and mind aligned with the goal, and put in the work to achieve the goal.  The value of the teammates & friends I’ve gained along the way through Team RWB cannot be measured – I am honored and blessed to work with an organization that honors those who serve in our nation’s military, and understands how the science of exercise and the importance of community can help us all.

I’ve run a couple more races already since MCM, and have a couple more races scheduled before the end of the year – Old Glory will be with me for each of them.  Looking forward, I think 2014 is going to be a great year – I’m excited about races already on the calendar (Cowtown Marathon, the Army Half Marathon, Texas Independence Relay, Wounded Warrior & Yellowstone Half Marathons) and I’d like to return to the sport of triathlon.  I’ll be wearing the Eagle, carrying Old Glory, cheering on my teammates and finishing with a smile!  Most importantly, I’ll be working hard to enrich the lives of America’s veterans by supporting our mission – after all, it’s my turn!