My name is Jessica Tyra, and I’m currently a stay at home mother to three beautiful children.  I became a member of Team RWB when we moved from Fort Riley, KS to Tampa during the summer of 2013. The chapter welcomed me as soon as we arrived. Right away, I was invited to runs, races, and BBQs.  I remember my first BBQ was at the Homeless Emergency Project, and I was able to meet some veterans who were currently homeless.

I was part of the Army from 2003-2010, during which I deployed twice.  My second deployment occurred while I was a single mother during the Surge from February 2007 – April 2008.  These 15 months were by far the hardest of my life.  My son lived with my parents, and I only got phone calls with him when possible, as Skype just didn’t work on our FOB.  I was lucky to receive emails from my mother with pictures and updates from him, as well as numerous care packages from back home!  Amazingly, my old elementary school adopted my unit, and I would get up to 15 boxes at a time to distribute throughout the whole AO.

Our FOB would receive indirect fire almost daily, and many of the attacks were deadly.  It was a true test of faith, having to hide on a daily basis and feeling safer when out on a convoy.  We moved into tents from a dilapidated building for the last few months of our deployment, and the target for IDF seemed to be right next to the FOB’s “tent city.”  On March 20, 2008 we received 12 volleys of indirect fire, with shrapnel from the 6th or 7th hitting me in my leg.  I was lucky enough to be treated on the FOB, and even though the piece of shrapnel is out of my leg it did leave me with some nerve damage.  I receive shooting pains up my leg every once in a while, but on good days my leg is completely numb.

This happened less than a month before we were leaving Iraq, and I was still in denial about how close I was to losing my life.  It took some “seasoned vets” to explain to me how close I came, which finally made me realize the seriousness of getting injured during a deployment.  I made sure to get treatment for my subsequent PTSD and was able to take over parenting my son.  We had some challenges, and it was a struggle to get back to normal life, but I can say I’m a better mother and person for everything I went through.

I chose not to use medication for my PTSD treatment; instead I opted for sessions with a therapist to talk about my issues, and I explored other forms of therapy.  Team RWB has helped me quickly find runs, softball games, and other events to help me get out and see how other veterans are dealing with their individual situations.  I like hearing all of the different stories, and I especially love the fact that anyone can be part of Team RWB.  It’s all about building a community with veterans and those who support veterans, and I am proud to be part of the team. I haven’t had to take my medication since I started running, and it’s a wonderful feeling to be able to control my own emotions and feelings with just these various forms of therapy!  I’m definitely not the best runner, or most in shape…but I enjoy these runs. 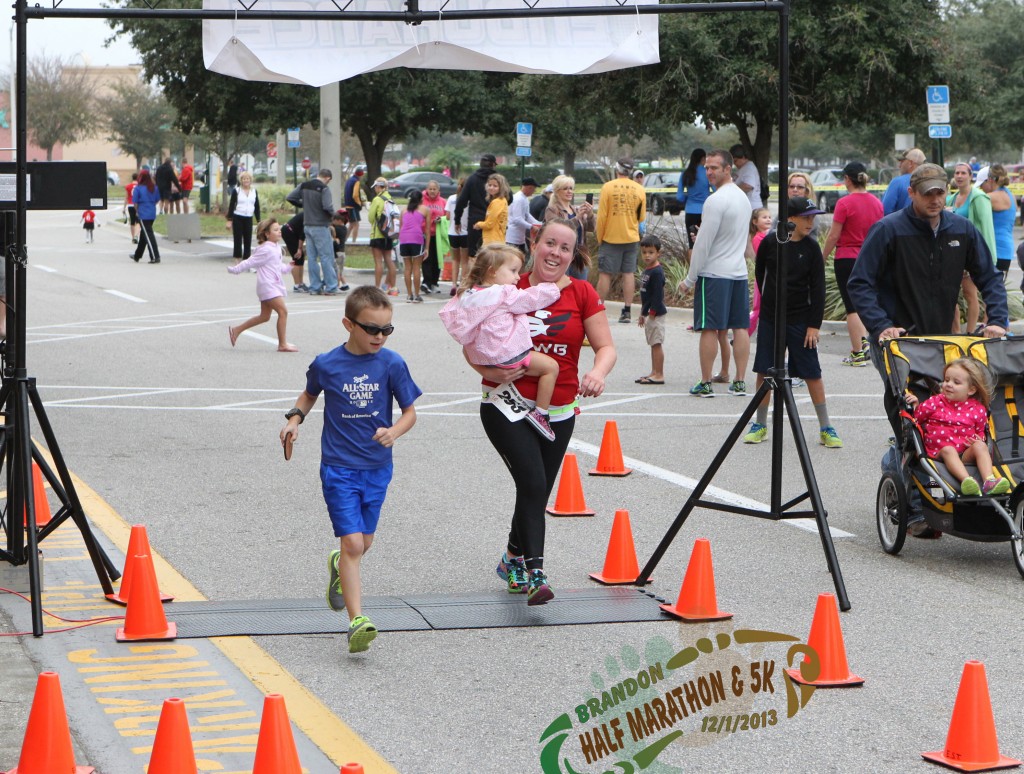 I almost feel like a veteran in disguise…I’m a stay at home mother, student (finished my Bachelor’s in 2013, now in Grad school), Army wife (to my husband of 4 years), and runner (love my half marathons!).  People walk right by me, and sometimes look at my Purple Heart license plate and tell me to thank my husband for his service.  It helps me stay humble, and realize that there’s so much more to life than recognition.  I needed to figure out who I was in order to deal with the stresses of war, and that was my biggest battle.  My injury has taught me that there are all sorts of pain we go through on a daily basis, but with the right mentality you can get through anything.

The best part about my story is that my husband, who was deployed with me during the surge, asked me out on a date, and we ended up hitting it off.  He and I understood each other’s injuries (I was in charge of debriefing him after his patrols and he was one of the medics who saw me when I got hit). We were able to know what was bothering the other person before we even said anything.  We were able to help each other with our nightmares, and even now, years later, we are still able to help each other heal from our war injuries.

My husband makes sure I go to every activity or run that I can go to, and with three kids it’s not many…but the few a month I can attend definitely help!  I look forward to continuing my journey, and with support like Team RWB I know I’ll be able to handle challenges as they come my way!