One defining characteristic of mine that has often dictated the direction of my life is that I like to take things to the extreme. If something peaks my interest, or strikes me as worthy of my attention, I tend to become obsessive. This was certainly the case during my senior year of high school when, among other things, I had to decide what to do upon graduation.

I applied to several schools, was accepted by some, and rejected by others. I also made my rounds through the local recruiting office; I sat down once with the Navy, a handful of times with the Army, and even more often with the Marine Corps. I was, and still am a brick in the water, so the Navy was out. I didn’t consider the Air Force or Coast Guard, but I did pursue the Army quite a bit. However, the bait of signing bonuses and that particular recruiter’s tactic of outlining what they could give me for joining quite frankly turned me off. The language of the Corps, however, drew me in. The few, the proud…always faithful…first to fight…once a Marine, always a Marine. I had a high enough Armed Services Vocational Aptitude Battery (ASVAB) test score to pick any Military Occupational Specialty (MOS) that I wanted, but when I signed the dotted line I had only one in mind. I wanted to be a grunt, one of the guys that kicks in doors; one of the people out front and center. 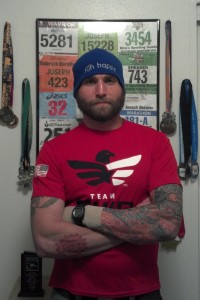 My other passion during my last days before adulthood was trail running. I had started running because I wanted to play varsity soccer, and had no illusions that my level of talent at that time would get me there. If I wanted a shot then I would have to be the best-conditioned player on the field. I ran all summer between my junior and senior years, and quickly developed a love for the sport that I originally started only as a means to an end. The event that pushed me to the extreme side of running happened in the Spring of my senior year. A friend and I wanted to hike the 70-mile Laurel Highlands Hiking Trail in my home state of Pennsylvania over Spring break, but due to excessive snow days our break was shortened to only three days on the trail. We called ahead to confirm our two nights at the trail shelters and we were met with skepticism. “It takes at least 4 days to hike our trail, and that would be pushing it.” We scoffed at the nay saying; after all, we were both teenagers and athletic ones at that. Long story short, we made it in our three-day window, but both of us were hurt and I even had to see the doctor for a strained quadriceps when we returned. It got me thinking though, could we have been the fastest people to hike the trail? A quick Google search of the topic both humbled me and changed my life forever. We weren’t the fastest, not by a long shot. I discovered that human beings can run further than the farthest I had heard, which at the time I assumed was the 26.2 miles of a marathon. There was an annual race on that same trail we took three days to hike… the course record was, and still is, 10 hours 43 minutes and 34 seconds…for 70 miles! I was instantly obsessed. I bought trail shoes, researched running, and ran longer and longer distances. I wanted to run this race; I had to know if I could do it. However, fate and my decision to join the Marine Corps put my running ambitions on the back-burner.

In June of 2004, I graduated from high school and boarded an airplane destined for South Carolina. I was going to Parris Island to become a Marine. My parents weren’t thrilled about my decision, despite my father having served in Vietnam and my oldest brother in the Gulf War. They thought I was too smart to join the Marine Corps infantry, and that I had better options in front of me. They wanted me to go to college, at least become an officer instead of going enlisted. My compromise was that I would join the reserves and go to college at the same time. I always thought that I would go active a year or two down the line, and when my family was more comfortable with the idea, I would make the Marine Corps my career. I graduated boot camp in October 2004 and then the Marine Corps School of Infantry in December – just as I had planned. Then something happened that I did not expect. The day I checked into my reserve unit, I pulled into the drill center thinking that it was a bit strange that so many cars were in the parking lot, after all, this was a reserve unit and it was the middle of the week. I began to put the pieces together and when I went to the admin office, my suspicions were confirmed… we were being activated. I called my Dad to tell him the news, I wasn’t going to college in January, instead I was headed to Iraq. 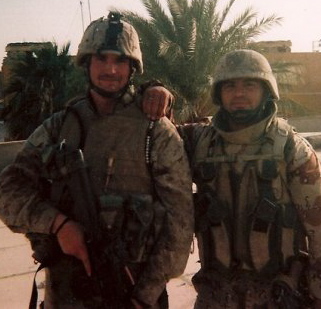 The next year of my life, my first as an adult, wasn’t spent worrying about exams and class schedules, instead I was worrying about my friends (and myself) being shot, blown up, or killed. Through seven months in the Al-Anbar province, I saw my unit lose 48 Marines and Corpsman – the most of any Marine unit since Vietnam. Somewhere around five months into the deployment, I began to notice I wasn’t okay, not even remotely. I stayed awake for days at a time, even when it wasn’t necessary.  When I did sleep, my dreams were invaded by morbid scenarios of things I had seen and things I feared to come. I was extremely superstitious about my actions and my role in the unit. Whenever we lost Marines to either death or injury, I was making connections in my mind that put the blame on me – what if I would have been there? What if I had done this or that? I had no intentions of going back to a life like I had before Iraq, mostly because I didn’t think it was possible, and partially because I felt I wasn’t worthy to make it home unscathed.

After Iraq my life was consumed by survivor’s guilt, and a sense that I lacked purpose outside of combat. At just 19 years old, I thought my life was one that should have already ended. I began drinking heavily, not knowing that what I was experiencing was PTSD. At a case of beer a day, I had all the signs of a budding alcoholic, but that was only the tip of the spear. Nightmares, panic attacks, and hallucinations were all a daily reality. I just wanted everything to stop, so I moved on from booze to drugs. Weed to calm me, cocaine for a rush of adrenaline, painkillers and sleep tablets to bring it all down. The abuse wasn’t sustainable. In just 6 months, I ran out of the money I had earned in Iraq, more than almost any normal 19 year old would ever have in their bank account. Suicide attempts landed me in the VA psychiatric ward on multiple occasions, but I still wouldn’t admit that I had PTSD.

My turn around was slow and drawn out over the next several years, but the depression and nightmares were a constant. My new solution, healthier than the outright self-destruction I had pursued at first, was to distract my mind by basically working myself to death. I had moved to Columbus, Ohio from my home state of Pennsylvania to get away from the atmosphere of drugs and run-ins with the law. I was in a new city, working 60+ hours a week while taking 19 credits at the local community college. I didn’t have time for PTSD, so the symptoms, at least on the surface, began to wane. It was a good plan in my head, and at first it even seemed to work. But after a few short months my body couldn’t keep up with the lack of sleep or rest. I fell asleep driving from one job to the next; I couldn’t stay awake in classes. I ended up quitting one job, getting fired from the other, and dropping out of school. I was back to square one.

Through a strange turn of events, I found myself working for minimum wage as a hotel housekeeper, estranged from the Marine Corps, my family, and all of my friends. Turbulent times seemed to loom ahead, but through a chance meeting after work with a man in a similar situation, I once again had hope. After I met Dane, who became one of my best friends and eventually my roommate, I was introduced to a whole host of other people that would change my life. One of these individuals, named David, gave me the spark I needed to take control of myself using an old love – the love of running.

David told me that he was training for a 50-mile race in Virginia that coming November, making him the first person I had ever met that actually ran ultra marathons. I told him about my dream of running Laurel and told him I would help him train and run a shorter race in preparation. In February, I ran my first ever race, the Holiday Lake 50K. I followed it up with a marathon, and then another, and then ran the 50 mile Masochist. By next year I was addicted, running marathons and ultras every other month. In addition to my running, I started a blog about my endeavors, detailing each race that I completed through race reports. Running and writing became my outlet and my therapy. I don’t buy into the belief that PTSD can ever fully be mastered, but it can certainly be curtailed.

I used my growing experiences to secure a spot in the Brooks Inspire Daily program; I had discovered a gift in running that I could use to help others and make a difference in their lives as well as mine. The relationship with Brooks enabled me to play an active role in starting the now annual event, called the Memorial Day 100. This relay, composed mostly of Iraq and Afghanistan veterans, consisted of running from the Virginia War Memorial in Richmond to the Iwo Jima Memorial in Washington, DC. The first year we raised over $10k for the Wounded Warrior Project, the second year we almost doubled that amount for Hope for the Warriors. The event, that I now follow from afar, continues to grow and takes place in New York with the relay ending at Ground Zero.

I am now in my 4th year of running, having done 7 marathons and 10 ultras. I am also in my 3rd year in the Brooks Inspire Daily program. In 2013, I am proud to continue my running career and helping my fellow veterans as part of Team RWB. 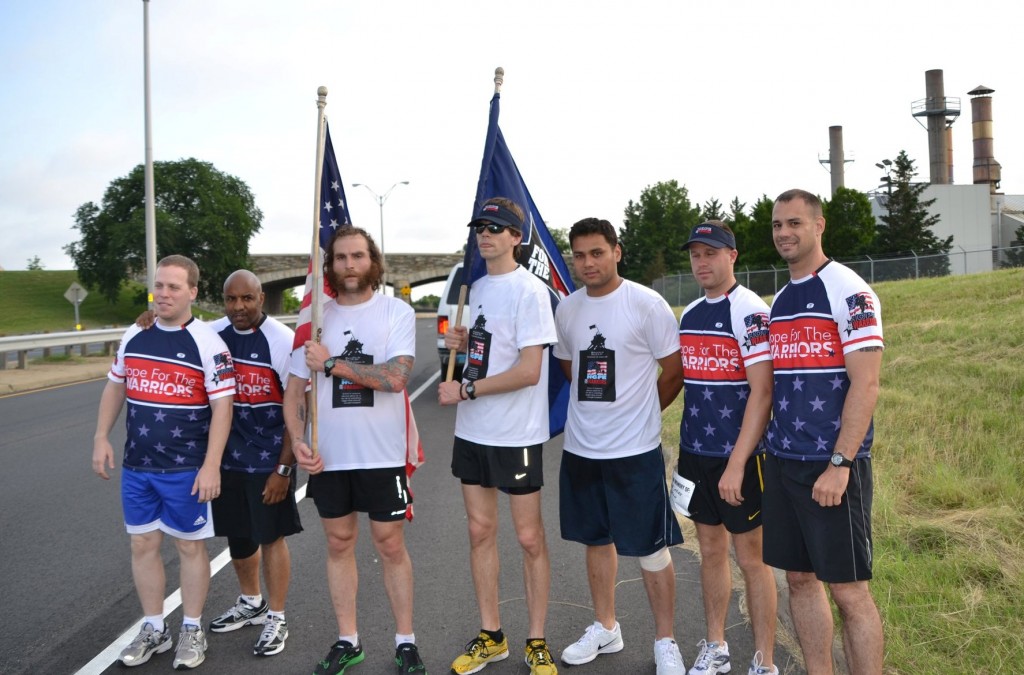