Between 2004 and 2008, I spent a majority of my time in Afghanistan in support of Operation Enduring Freedom as an infantry officer.  In July of 2008, I left the Army; however, not on my own accord.  It is rather embarrassing to say this, but I had gone from being a respected leader and battalion executive officer to an Army Substance Abuse Program (ASAP) rehab failure.  I did not realize the toll that multiple deployments took on my mental health, and I self-medicated with alcohol.  I did not want to admit that I had any chinks in my armor like a drinking problem.  The next several years were a blur, and I lost myself along the way because I would not reach out to others.  My thought was that I was physically and mentally tough; I could not have any problems.  Hell, I was an Airborne Ranger!

Over the course of a few years, my life fell apart.  My life was in shambles, and I was in a very dark place.  I felt like there was nowhere to turn, and figured I would just die drinking.  PTSD and alcohol dependence were killing me physically, mentally, socially, and spiritually.  My will to live was pretty much broken.  Honestly, I did not want to live any more.  Physically – I weighed over 230 pounds and could not run a mile without inhaling small trees and furry animals.  My blood pressure was through the roof, and my cholesterol was sky high.  My waist size was ginormous!  Mentally – I was all over the place.  Severe depression and anxiety ruled my life.  Ending it all rattled around in my brain several times.  I was pissed off at the world, and I was just a very angry person.  Socially – I had no friends and pushed my family away.  I had totally isolated and withdrew from everyone that cared about me.  Spiritually – I had no faith in anyone or anything.  Nothing mattered anymore!

Fast forward to April 2013 when something very special happened as I was beginning to get my life back on track.  I hooked up with a group of veterans who enjoyed physical activity, and needed an outlet.  We formed a group called Team VA – Fear the Kilt.  Kilts with our service tartans became our rallying point.  Ironically, at our first race as the crazy kilters, we ran into someone with a Team RWB shirt.  This is the point that my life definitely changed.  I found what I had been missing since I left the Army.  Genuine people.  The brotherhood.  The camaraderie. People who understood me.  Nothing but positive people who embraced teamwork.

Now I am down to about 170 pounds, and my crowning achievement for the year was running the 27.5 mile Megatransect trail race here in Central Pennsylvania.  I ran about 20 other races this year.  I rediscovered the power of exercise.  I now reap the physical and mental benefits of consistent and challenging exercise.  I have taken my life back, and overcome the challenges associated with PTSD.  PTSD and booze used to own me, but now I own them.  My mental health has never been better.  I have regained my self-esteem and self-confidence. I now have a wonderful group of friends and a very large extended (sometimes dysfunctional family) that genuinely cares about me (and I care about them as well). I stand on strong spiritual ground today, and realize that faith can take me great places.  I have learned that faith is the opposite of fear.

Through the support of my wonderful family and the members of Team RWB, I have reclaimed my life and accomplished things I never imagined I could. I have overcome quite a few obstacles over the past few years. I have been knocked down a few times, but I always dust myself off and jump back up and keep moving forward. Right now, life is good, very good! There are way too many people to thank that have stood by me in a non-judgmental manner. Through all of this I have finally found my calling, and that is to work with Veterans and continue to advocate for them. I have graduated with a degree in health science, and I am currently in my second year of graduate school working on a Master of Science in Clinical Mental Health Counseling with a focus on military and veterans.  I have gone from running to the liquor store to running the TEAM RWB Central PA Chapter.

For my fellow Veterans that think you are a bad ass and do not need anyone else – BULL! I tried to do everything on my own, and all it got me was in a lot of trouble. We do not live in a vaccum! The best thing I ever did in my life was learn to rely on other people and open up to them. Yes, it is ok to show emotions and feelings. It is not a sign of weakness! I have learned to surround myself with positive people and cut the negative ones out of my life. To borrow from the Ranger Creed, “Never shall I fail my comrades. I will always keep myself mentally alert, physically strong and morally straight and I will shoulder more than my share of the task whatever it may be. One-hundred- percent and then some.” If you took the time to read this, thank you. 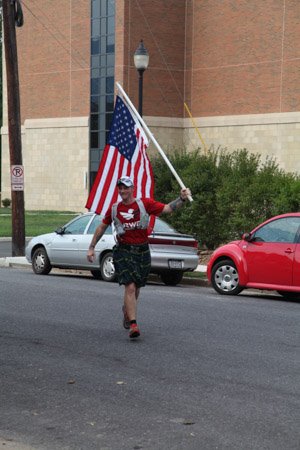