Shawn spent 10 years on Active duty and currently serves in the U.S. Army Reserves as a CW4 UH60 Instructor Pilot and a Department of the Army Civilian UH60 Instructor Pilot. Shawn is married, has two kids, three dogs, two donkeys (yep… donkeys: Fred and Lamont), 15 chickens, and one rabbit. This is the story of how Team RWB helped him.

It’s 6am on March 1st at the Longleaf Horse Trail in the De Soto National Forest, about thirty minutes south of Laurel, Mississippi. I am standing with almost 160 of my closest friends, getting ready for the start of the Mississippi 50 trail race. Okay, so I don’t really know any of the people here, and it’s actually a little after 6am because everyone is talking so loudly they can’t hear the race director trying to get their attention so he can start the race. But I am jumping ahead, so let’s start at the beginning.

Eleven months ago, I was a bit out of shape. To be honest it was more than a bit; I would wear out just chasing my kids around the house. I had been off active duty since the end of 2005, and although I am still a Reservist, I did just enough to get by on each PT test, and barely passed the tape test. It was time for a change; I had just turned 40, so hey why not start worrying about my health. On April 1st 2013, I woke up, threw on my old pair of running shoes and some shorts, and headed out for a “jog” (at least we’ll call it that for now). In early May I heard about Team RWB, and it sounded like a perfect outlet for me. There were soldiers, civilians, and veterans all getting together and working to integrate into each other’s lives and the community through sports and physical activity. It was just what I needed. I learned that Fort Rucker had a new chapter of Team RWB, and I was able to attend their “Run As One” event in mid May at Beaver Lake. I’ve never been an exceptionally fast person; well I was quick to get out of running when necessary, but other than that no, not fast at all. This lack of speed has stuck with me through the years. As I started running more, I realized I needed to have a goal other than speed. So here was my goal: if you aren’t fast, you should be able to run for a long time. That I can do.

Now jump ahead a few months. I was running with no real purpose except to run, and a friend talked me into signing up for the “Soldiers Half Marathon” in Fort Benning, GA. I found a free online training plan, and just like that I had a goal to strive towards. Since I was signing up, I decided to sign the kids up for the Kids Marathon. Yep, they ran 25.2 miles over 100 days and then finished with a 1-mile run at the Infantry Museum to finish their marathon.

Still…I wasn’t fast, but I started hearing about these crazy people who run even longer than a marathon. I mean, who in the world would want to do that? As my running progressed, I found our local Team RWB Facebook page to be a great place to meet some folks and get encouragement. Sometimes all it took to get me out the door was the knowledge that someone would probably ask me later if I ran that day, since they didn’t see anything about it on social media. Then it happened, something clicked in my head. I decided to sign up for a 50 kilometer run taking place in March of 2014. So back to the Google machine, which led me to a book that had a training plan in it for these people called “Ultra runners.” Now the half marathon would just be a training run. That half marathon was my first “race,” remember I use the term race loosely, and I had a great time. I even ran into a few other Team RWB folks up there. That’s me on the far right and the guy who got me into all this running stuff on my right.  Thanks Randy!! 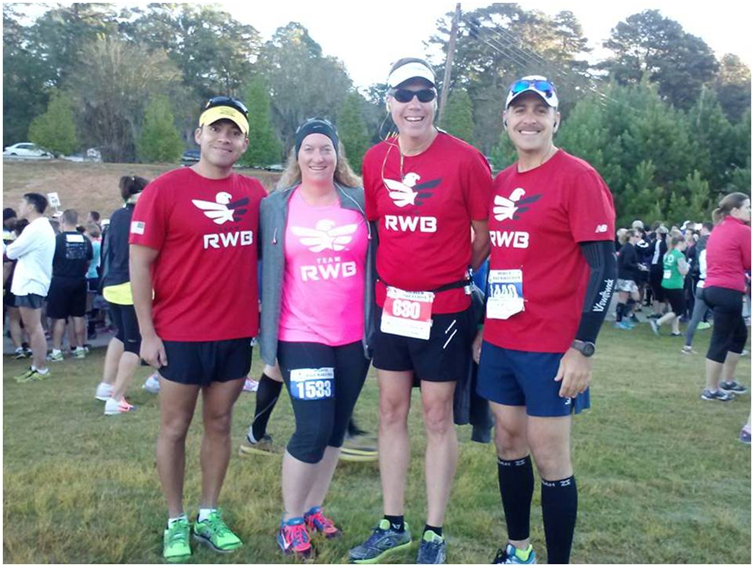 Now it’s time to get serious about this Ultra running thing, so I started looking for fellow gluttons who would like some punishment. Surprisingly there are actually people out there who will show up when it is 35 degrees out at 6am on a Saturday morning to run in the dark with you. Each of them were Team RWB Fort Rucker Eagles. I can’t say enough about Kurt, Anna, Mark, and all the Team RWB folks who spent time with me as I put in some mileage. 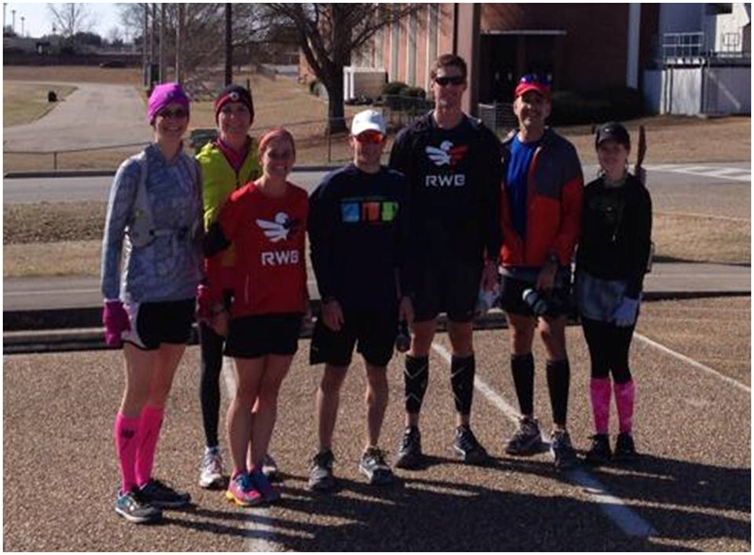 So now it is March 1st 2014. It gets quiet finally as the race director holds up a starter pistol, BANG we’re off. Fitting that it is dark and chilly out as we start this run since most of my training has been just like that. During the first 12.5 mile loop I spent time talking to a few people who were just like me, on their first ever Ultra. Then there were some folks who made a habit of running distances that most other people would call crazy. That first lap was a good one, and I was glad to finally see the results of all this training. I rolled into the start/finish line and my wonderful family was there to help refill bottles and get me on my way again. The second lap was a little muddier than the first. I also stopped worrying about trying to get around or over any of the creeks, and just cruised right through them because honestly the water felt good on my swelling feet. This time around was just a little slower than the first, but I was also able to join forces with another Team RWB member as I crossed the start/finish line for the second time. I never did get her name but you would have thought we were old friends as we went into and out of the aid station together. She has a family member deployed right now in Afghanistan, and she has really enjoyed supporting other vets.

For the next mile or so we ran together, and she was with me as I surpassed my longest run ever. I still had 5 miles to go though as she turned off for another of the long loops because she was just past half way through her 50 mile run that day. During that last 5 miles, I hit a few low spots physically, but stopping was not an option. So run, jog, and walk, jog, run and then repeat became my mantra. Guess what happened next… I finished. It had been building for 11 months. I had lost some weight, ran some miles, and made some wonderful friends. Team RWB was a big part of this for me. So I want to say thanks to all of you. I just hope that I can continue to help and support all of you just as you have supported me.

Oh, by the way I have a 100-kilometer bike ride coming up in a few months… anybody want to get some riding in? 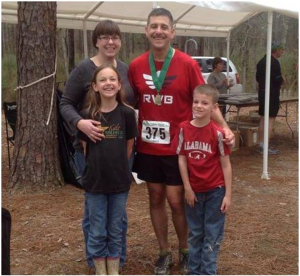 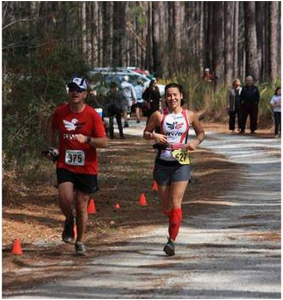