On May 22, 2007 during routine route security operations, my (2) Stryker vehicle section came under small arms fire. While attempting to isolate the origin of the small arms fire my vehicle was hit by a buried, command-wire IED consisting of (EOD – estimated) 4-5 155MM artillery rounds, mortars and propane tanks. After a very brief blackout, I woke to a smoke and dust filled Stryker hull; the blast had come in from the radio array on the right side and blew a significant hole in that section of the vehicle. After shaking out the cobwebs, I began to assess the situation and immediately realized my right leg was mangled; I could see my fibula near my knee (my fibula and foot were gone). I called out to my squad to report my condition and attempt to get their status while grabbing one of the three tourniquets I carried in my kit, (1-rapid and 2-rachet straps) and began to apply the tourniquet. I feel this is one of the reasons I was able to cope with the fact that I was an amputee so quickly during my recovery – I knew my leg was gone immediately. I did not wake up in a hospital missing my leg; I actually tended to it first hand. I think it would be more difficult to simply wake up to such a sight.

I remained conscious throughout the ensuing firefight – from the arrival of the Quick Reaction Force (QRF) through the Blackhawk flight to Balad, and even while trying to tell the surgeon I didn’t need a catheter (cause “I got this doc”). I remember the medic who was assigned to hold my hand, look me in the eye, tell me I was going to be okay and keep me awake because they couldn’t let me go under due to the amount of blood loss. Finally, after however many transfusions were required, I went under. The next many hours were a haze of slight consciousness; I received my purple heart, and landed in, what I would eventually find out was Germany, where the road to recovery began. 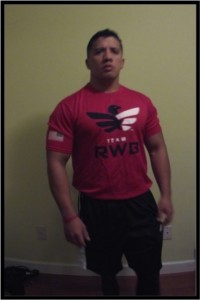 After spending five days in Germany with a great staff, trying to lift my mom’s spirits over the phone (unsuccessfully) with jokes,  meeting the real “Wild Bill” Guarnere (Easy Company 101st Airborne “Band of Brothers” and fellow amputee), and undergoing several more procedures I was sent on to Brooke Army Medical Center (BAMC). At BAMC I would have to go through revision surgery as my knee was too damaged to be useful, so I would become an above-knee (AK) amputee. To me it made no difference because I remembered how bad it was and I didn’t expect to still have a knee at this point. Both the staff at BAMC, and the community of San Antonio, TX were so supportive and positive. My Physical Therapist, MAJ Campbell, made it very clear after our first meeting, “you will not spend much time in this facility and you will be going home in 6 months.” I didn’t believe it since I had heard that AKs usually take 12-18 months to recover, but he challenged me early and often and my competitive nature took over. I was doing 5K events in my wheelchair before I even had my first prosthetic. I took a trip to Colorado for rock climbing and white water rafting the Colorado River in a test socket, and later I went snowboarding (my first time ever). MAJ Campbell told me that the best therapy was to just get out there and do things; he was right, and I was headed home just one week past the six month mark.

Inspiration can come from many places.  My inspiration comes from my friends that are still in the Army and serving proudly, fellow Veterans, the many “challenged” athletes competing at the highest levels, and the many children stricken with disease and injury who are still able to have a positive outlook on life. And that list is just a start. I guess it could be summed up to this: I am inspired by anybody and any moment that brings or stirs me in a positive emotional way – from a great song lyric to the quadruple amputee that climbs mountains. 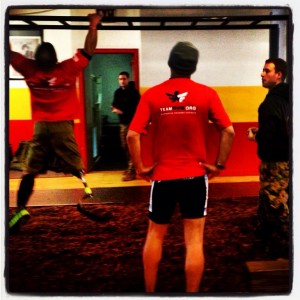 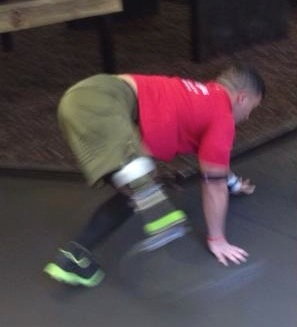 And finally when asked about my drive: I am now driven to wear my country’s colors again. This time in a friendlier environment – the Rio Paralympics – a lofty goal I know, but I’d love the opportunity to dawn the Stars and Stripes again.  I’d love the chance to honor the men and women who serve in uniform, but even more so to honor the memory of the men I lost that day in May. That blast took my leg and sure that is terrible, but that incident took the lives of men in my charge; one man – a father, husband, son and brother; the other – a young man of 18 years who had his whole life ahead of him. To honor my brothers, that is my true and constant inspiration.