Observations on Life from a 50 Mile Ruck

Observations on Life from a 50 Mile Ruck

A few weeks ago, I wrote an article detailing why I and several friends were participating in the inaugural GORUCK Star Course – 50 Miler in Washington, D.C. My colleagues, Relationships Manager, Sarah Holzhalb, and National Community and Content Manager, Shaun Provost, also took on the challenge. Now that we’re all about a month removed from the event, we felt the need to share some of what we learned (and of course, some pictures)!

To begin – it was tough. Really tough. One of the most difficult 24-hour periods of our lives, for sure, and there was almost a 75% drop rate. But we learned (and relearned) some really important life lessons that we thought were worth putting on paper.

There were 650 people that started this event, and we all got a chance to mingle for a few hours before the event started. A common refrain overheard was “I’ve never walked this far before, and I’m going to see how far I can make it.” While we love that people are challenging themselves, upon post-event reflection, the mindset might have been the reason that many dropped, as it gave them a subconscious “out” after they had bested their previous longest distance.

• JJ – I was the only non special operations veteran on my team, and I’ve learned there comes a certain mindset with people from that background…determined, but pragmatic. When I signed up to join that team, I knew that not finishing the course was not an option – the only variable is how long it would take. I really think that mindset helped, especially in the most challenging moments. Quitting was not an option, so we didn’t expend any effort even considering it. Very applicable in all aspects of life, methinks. We actually had a member of our team drop because of some problems with his legs, which stunk. But the issue there was pace and finishing in under 20 hours, and not continuing. There’s not a doubt in my mind he would have kept going until the end.

• Team Epic Eagles (Sarah & Shaun) – Put in the work and the training required for the event distance. Wear the ruck all the time, doing everything. Like Blayne’s mentioned before…hide the reps. Work your way up to rucking with more weight than is required for the Star Course. Wear it cleaning the house, walking the dog, mowing/weed eating the lawn, power washing the house (some of us did that).

Even though the title was “50-miler,” when we signed up for the event, it said very clearly that completing the course would be a minimum of 50 miles. We realized about ⅔ through the course that we would be rucking substantially more than 50 (due to a few missteps, route choice, etc., this happened to everyone). We made the choice as teams to not even consider the number of miles we walked, as it didn’t matter. No GPS. Completing the course was all that mattered, and that meant hitting all the points in under 20 hours. Period.

• JJ – I saw many people drop because they had improperly framed success as rucking 50 miles, and not completing the course. Take exhaustion, add a perceived sense of injustice from realizing you had to ruck more than 50 miles, and it was enough to cause people to drop who could have finished. A huge takeaway for me was making sure you’ve got the right success metric before you start. This strongly ties into Lesson 1 – mindset matters.

• Team Epic Eagles – This event wasn’t for the faint hearted, and we all knew that going in. JJ’s right…all the paperwork leading up to the event said minimum of 50 miles, meaning we were likely ending up at much more. Our team spent a good amount of time right at the beginning figuring out the least number of miles we could walk and still hit all the waypoints. We figured we were mentally strongest at the start, and knowing our total mileage would make us feel like we were working towards an end goal.

It rained 5” during the event, and was unseasonably cold – the perfect recipe for hypothermia.  It was pretty miserable, and to pretend that it didn’t bother you was a waste of time.

• JJ – One of the things I’ve learned from reading stoic philosophy, and my inconsistent yoga practice is that everyone has negative thoughts – you can’t control that. What you can control is how you react to them. About 4:00 in the morning, I knew that I was likely going to start to feel sorry for myself at some point. I was cold, wet and hungry – it’s natural. When it happened, I was ready for it, I was able to acknowledge it, and move on without any hangover. I don’t know that I would have had that maturity 10 years ago. I might have started to get angry at myself for feeling that way, which can spiral out of control rapidly.

• Team Epic Eagles – We weren’t necessarily prepared for the sheer amount of wet that was about to happen due to the rainfall overnight. We were prepared with one change of clothes (which added weight), but we weren’t prepared for being continually soaked for hours on end. If you’ve got some buddies or family in the area who are willing to be on deck all through the night and next day to support you, recruit them! That would have helped to have someone carry extra dry clothes for us. This would also be helpful to have different snacks, water fill ups, and some extra motivation with buddies on the warpath with us! 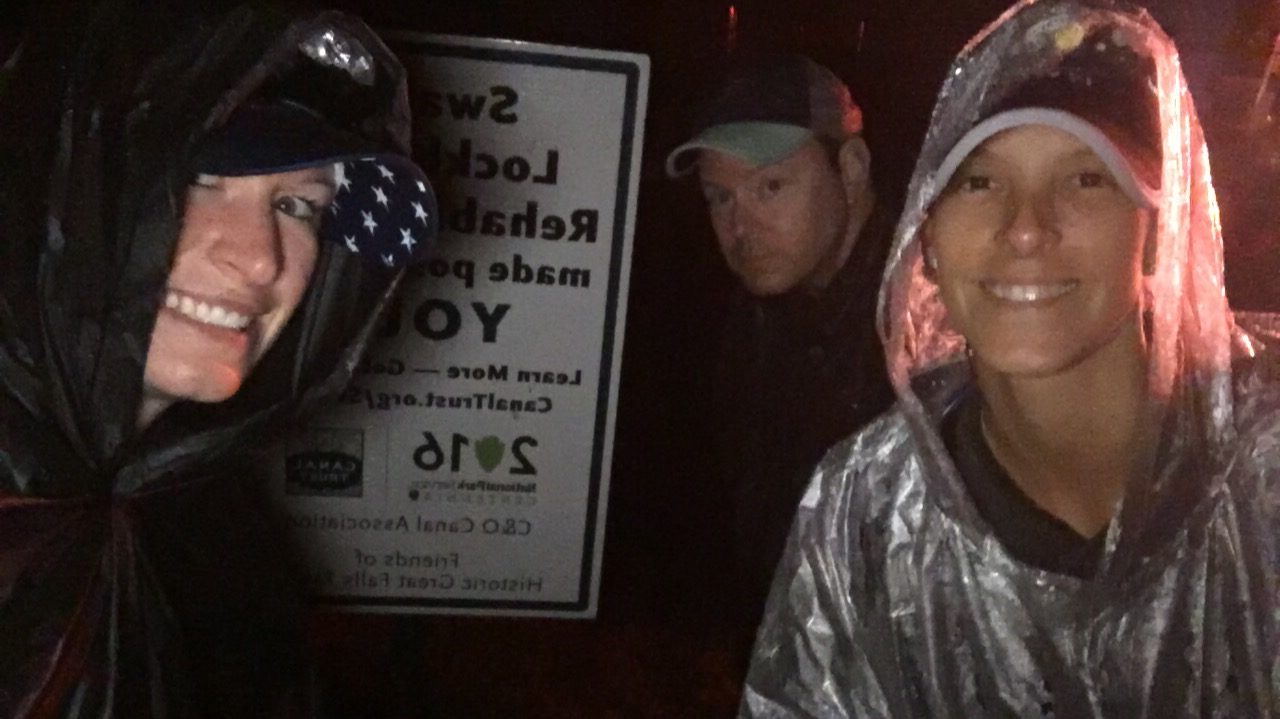 When you really boil it down, we were walking (albeit carrying some weight). It didn’t require complex thinking, split-second decision making, or above average hand-eye coordination. It just required putting one foot in front of the other, over and over.

• JJ – We didn’t have any fancy gear or electronics like many we saw on the course – just PB&J sandwiches and beef jerky. Success here was not complicated. All that was required was perseverance. I’m not sure, but that seems like a good metaphor for almost anything (including life).

• Team Epic Eagles – Pick people you can spend 20+ hours talking to, in your highest and lowest moments….and those same people who understand that silence is okay as well. Keep putting one foot in front of the other. That’s all there is. You’ll get there!

Though we were all concerned about finishing under 20 hours, we each stopped at certain points to do a little self-care and route planning.

• JJ – We could have just kept grinding and walking the entire time, but I’m firmly convinced that we finished much faster than we would have if we had not stopped. Between renewed motivation from some coffee and warmth, and using our brains to think strategically and plan, I know this saved us time in the long run. Again, I think this is a metaphor for about anything you want to do.

• Team Epic Eagles – Deal with issues as they come up, instead of muscling through it to keep going fast, fix it… problems will slow you down later down the road. If your poncho fails and you get wet, change your shirt, change your wet socks/deal with hot spots, etc., as soon as it starts to bother you. It’s worth to stop early and fix issues. They will haunt you later. 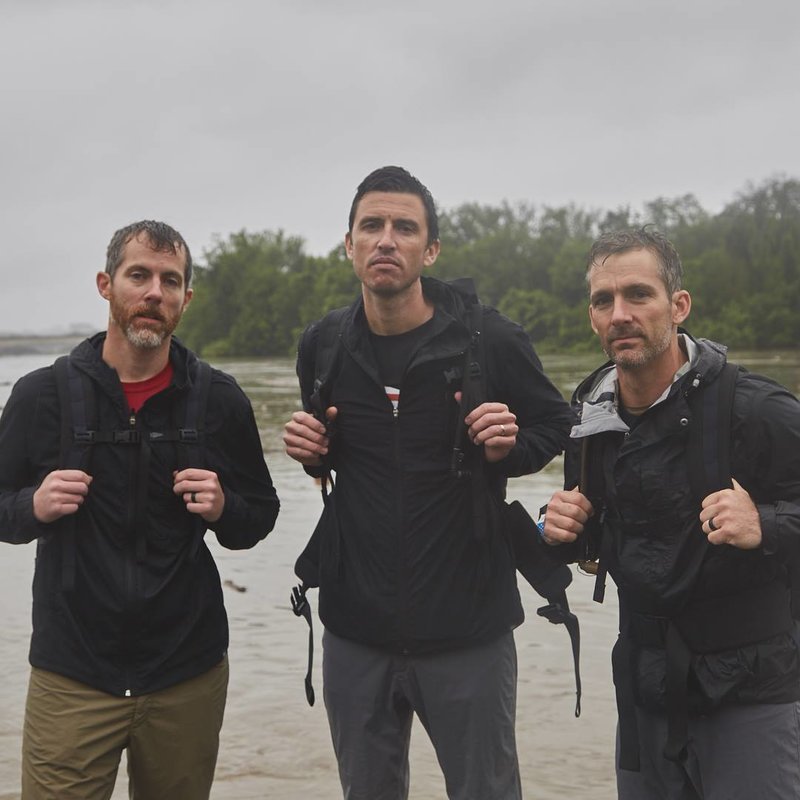 In closing, this was a special experience for all of us. It was hard. It was memorable. We got to spend time with some great friends, and experience our nation’s capital in a new way. We walked away sore, but much better for the experience, and it provided us with a healthy bit of context as it relates to life.

• JJ – I left this experience more enriched personally, as it provided me with all 3 of the components of Team RWB’s Enrichment Equation – Health (from exercise), People (spending time with close friends), and Purpose (being part of a team). No matter who you are, I’d invite you to find some friends and sign up to do something hard. I promise you’ll come away from it happy that you did.

• Team Epic Eagles – While some of us probably felt we could have gone farther, we called it as a team at Mile 28. We all wanted to start and end together, and knew we couldn’t keep the pace needed to make it to the end under the time limit. Our spirits weren’t damped though because we quickly started reviewing lessons learned over a cold adult beverage (after a long, hot shower), and planning how we will improve and KICK ASS in the next Star Course we sign up for as a team! We’ll be back! #TeamUnfinishedBusiness