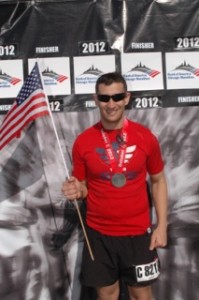 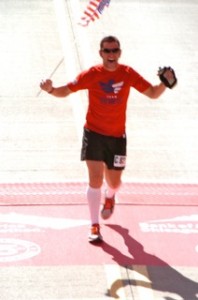 This week I was honored to speak with one of our TRWB Veteran’s, Richard Brija.  He was kind enough to share with me his story of overcoming adversity and getting his life back on track despite a barrage of health related obstacles.  With his blessing, I now want to share that inspirational story with our larger community in the hopes that you will feel as impressed and motivated as I was by his spirit and determination.

Richard served as a Unites States Marine from 1999-2004 before moving on to receive his EMT certification and become a paramedic.  However, after a few years working in the field, he felt the itch to re-enlist in the Marines and continue serving his country in a familiar capacity.  It was around this same time in 2008, that Richard became very interested in endurance sports and he quickly proved his physical prowess by running numerous marathons, ultra-marathons, and Ironmans over the next couple of years.  In 2010, Richard and several of his friends flew to Chicago in order to run the Chicago marathon together.  However, upon arriving, Richard began to feel sick to the extent that his friend decided to take him to the hospital.  Upon examination, the doctor diagnosed Richard with an incurable form of esophagitis, which is essentially a condition whereby ulcers form in the esophagus and cause severe pain and difficulty eating, drinking, and even breathing. The condition forced him to be admitted for 10 days, so his dream of running the marathon that year was shattered and he was forced to watch the race from his hospital window.  As his discharge approached, Richard began to feel strong back pains, and upon further examination the doctors diagnosed him with pneumonia.  This added antibiotics to his already lengthy list of pain meds, blood thinners, sleep aids and other necessary medications.
Eventually, Richard was well enough to fly back home to Texas, however, almost immediately the pain in his back began to spread to his chest.  Upon arrival in Texas, Richard’s girlfriend brought him home and promptly broke up with him – adding insult to injury.  From this point the pain only increased, his breathing was labored, and Richard’s experience as a paramedic drove his decision to finally call 911 – a move which later proved to save his life.  It was during this emergency visit that doctors discovered pulmonary embolisms (blockage of arteries in the lungs usually due to blood clots) in both lungs.  This is a very severe condition that results in sudden death of 1 in 5 who are diagnosed with the condition.  Even more medications were added to his already elaborate cocktail of pain meds, anti-viral pills, blood thinners, and sleep aids.

Needless to say this is a lot for one person to handle, especially in such a short period of time.  His state of health drove Richard’s decision to exit the Marine Corps.  This time the transition from military life to civilian life was significantly more difficult given the uncertainty of his health, job prospects, and strained support system.  He admits that he was overwhelmed with depression; began to alienate himself from others, and felt drained from the effects of his powerful medications.  The unknowns, reservations about exiting the service, and lack of confidence about his future exacerbated the difficulty of the transition to civilian life.

Richard was down but not out.  Despite the cards being stacked against him, Richard continued to train and think positively.  Doctors credited his excellent fitness and endurance for carrying him through such an onslaught of health conditions.  Without such a strong state of physical conditioning, it is likely that he would not have survived the health conditions that afflicted him in such a short period of time.  Thanks to a community of veterans and supporters in Team Red, White & Blue, Richard was able to get his mind right again, share his experience with like-minded individuals, and overcome what felt like insurmountable obstacles.  This past year he finally ran the Chicago Marathon – his self-proclaimed “coup-de-gras.”

After hearing this Marine’s story, and almost feeling exhausted myself from the emotional ups and downs that Richard went through, it is obvious that he still has the heart and passion of a Marine.  He proceeded to tell me that his experience pales in comparison to that of his Marine Corps friends, and what they have endured.  This statement is a true testament to his humble character and the immense selflessness and brotherhood that exists within the Marine community.

This fall Richard will be moving back to Chicago to re-instate his paramedic license and complete some prerequisites in order to return to school in January to pursue a Physician’s Assistant degree.  In the meantime, keep an eye out for Richard who will be running a half-marathon over Thanksgiving weekend, and gearing up for his third IRONMAN in Lake Tahoe, CA.  Best of luck Richard, and thanks for sharing your story with TRWB! 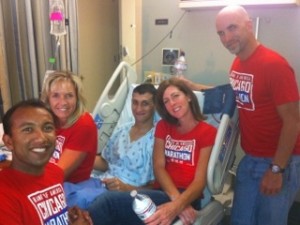