Our bus rolled out of the hotel parking lot just as the sun was starting to break in the West Texas sky. The relative expanse of Waco soon gave way to small towns and rolling prairie broken up by cattle fences and mesquite trees. The bus was quiet; most of us letting the caffeine from the morning coffee work its magic. All 34 of us, 17 Post 9/11 veterans and our guests, perked up as the bus took a right turn onto the dirt road that led to Prairie Chapel Ranch. We moved through the Secret Service checkpoint and drove up to the helipad covered in large white tents packed with mountain bikes. The crowd gathered around our bus and broke into cheers as we stepped off. The 2015 W100K was about to begin.

The W100K is an annual three-day mountain bike ride hosted by former President George W. Bush (and the Bush Institute’s Military Service Initiative) at his ranch in Texas. Each year, a small group of Post 9/11 veterans who have been wounded in combat are chosen to ride with the President, and offered the opportunity to share in the camaraderie of service and the mutual love of the sport of mountain biking. The aim of the ride is to highlight the service of Post 9/11 veterans and to bring attention to the resiliency of all veterans, particularly ones that have suffered both visible and invisible wounds.

The experience is surreal. It’s not every day you get to ride mountain bikes with a former President of the United States. President Bush rides every kilometer, usually hard, and always at the front. He relishes in the chance to connect with the men and women he once led. As cool as it is to meet and ride with the President, what really struck me was the bond between the riders and our guests (mostly spouses or close family and friends). On Thursday we arrived as individuals, and by the end of the first day’s ride we were already a team. 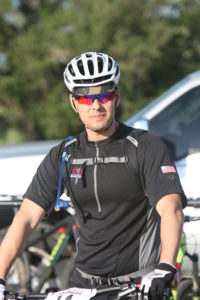 As a busy adult with a family, I don’t get to engage with the team as much as I’d like these days, but it doesn’t mean I don’t still feel connected. It’s that feeling of connection, within Team RWB and beyond, that has been the most important factor in my transition. When I first got out of the Army I thought I could go it alone. I didn’t want anything to do with the military or veteran community. In fact, I didn’t really want anything to do with any community. It took me a while to realize that my monastic lifestyle was not going to lead to the fulfilling life I’d hoped for. I needed to put myself out there if I wanted any shot of making a successful transition to civilian life. It was difficult at first. I still wore the mental armor I’d built up from my time in service, but as I’ve grown older and more removed from those days I’ve found it easier to take some of it off. It can be a hard thing to do, to be vulnerable, but it means that you get to form real, meaningful connections with people. Those connections are what make the good days better and the bad days seem shorter. They are what separate me from who I am now and who I was in 2009 when I was walled off and alone. Even eight years on, I think I’m still transitioning in some regards, and there are still moments of struggle. Moments when the armor goes up and I withdraw, but I also know that there are supportive people in my life who I can turn to for help and understanding.

It’s been over a year and a half since I first rode the W100K and I think I’m still processing what it means to me. Since then I’ve been back to the ranch as an alumni rider and gotten to see most of the friends I made in 2015, as well as make new ones. Reinforcing these relationships is the most important part for the W100K to me. There’s also the incredible honor of having my portrait painted by the President and being included in his new book, Portraits of Courage. The collection of paintings is beautiful and speaks to the unique relationships the President has built with each of the veterans portrayed in the book. I’m incredibly grateful for these experiences and my biggest take away is a continuation of what I’ve come to realize since I left the military; cherish the relationships in your life. It’s the people in our lives that make it worth living, and I’m lucky enough to have some great ones in mine.