The RWB Family Vacation to RAGBRAI

The RWB Family Vacation to RAGBRAI

One of the most well-known phenomena of the military experience is the ability to form lifelong friendships with total strangers over a matter of hours or days. The crucibles of training and combat provide the proximity, unity of purpose, and common mindset that allow people from widely disparate backgrounds to understand and appreciate each other, and the bond of shared sacrifice cements the resulting relationships.

But it is equally true that, after separation, many veterans are hesitant to form such bonds with their new civilian peers. As the sociological divide between those who have served and those who have not becomes increasingly pronounced, it can be difficult for veterans and civilians alike to find the common ground and worldview necessary to create deep, lasting bonds.

Until a year ago, I had spent my entire life in the narrow slice of the pie chart depicting the portion of the public who has served. I was raised in a family whose tradition of military service runs uninterrupted from the Spanish-American War to Operation Inherent Resolve. No sooner had my ancestors arrived on American soil, than they took up arms to defend it. 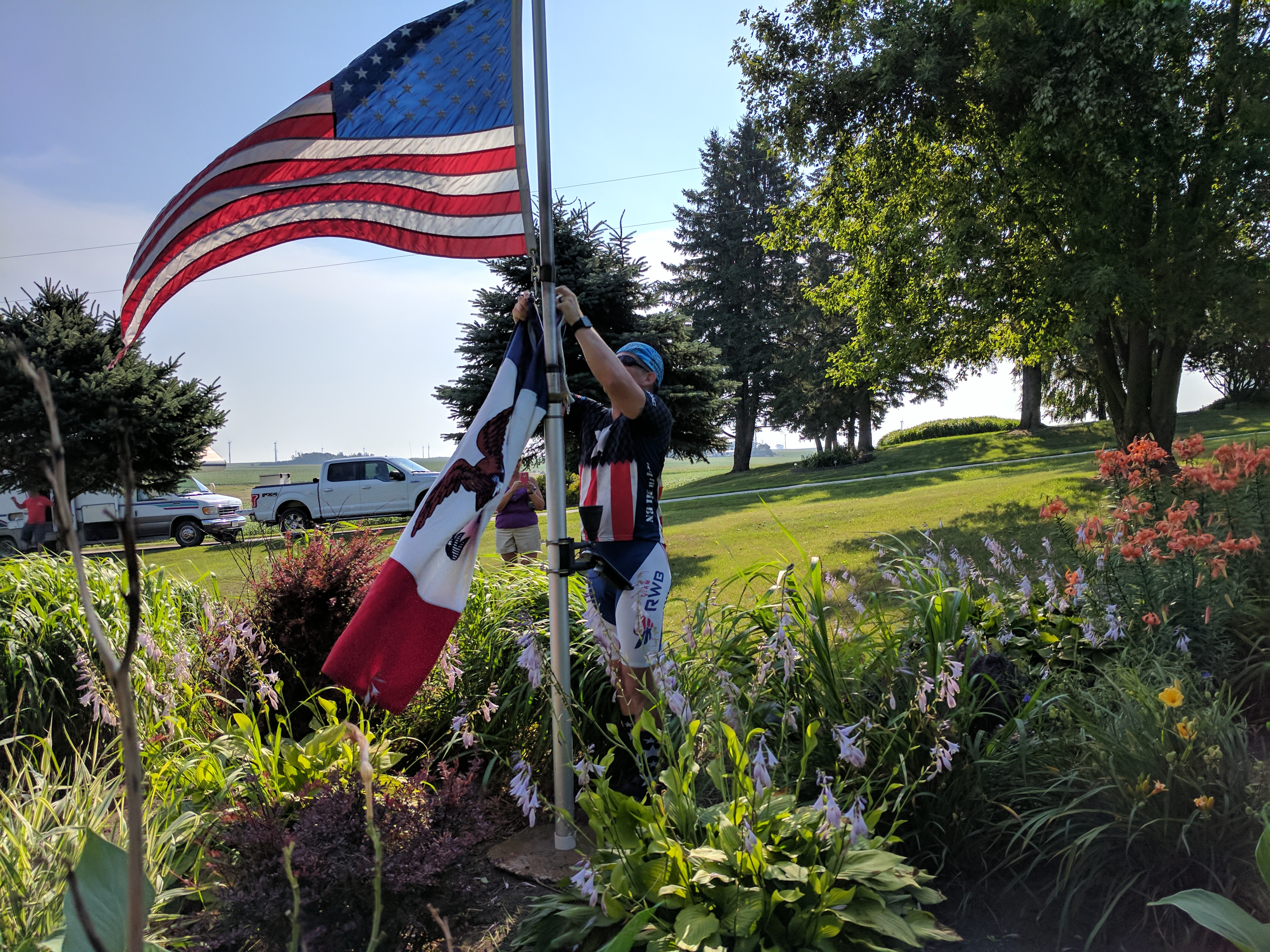 My entire understanding of our nation and culture was built through the lens of God and Country. While I held a variety of civilian jobs during the 15 years I served, I always considered myself an Airman first, and everything else second. So when I came to the realization that it was time for me to get out, I quickly discovered that it was going to be about a lot more than a change in employment. I was going to have to find a way to close the book on a long, demanding, dynamic chapter of my life, and find a way to integrate myself into the fabric of the “real world.”

There is no manual for that job; no challenge-and-response checklist to get you through the task. My last job in the Air Force required almost complete secrecy, and so I learned how to reflexively compartmentalize my thoughts and emotions. I took the same approach to my transition from military life to civilian: I grew a beard, boxed up my uniforms and awards, threw myself into my new careers, and more or less pretended that the previous decade and a half didn’t happen.

But I found that mindset to require a certain amount of internal dishonesty. My service is, and will always be, a huge part of who I am. It may be awkward to talk about in some social situations, but that doesn’t mean it can be ignored.

The trouble is that it can often be difficult to know how a new group of people will react to the “veteran” me. Some are casually curious, peering at me like a bear on the other side of the glass at the zoo. Too often, I hear a reflexive and insincere “thank you for your service,” which I try to accept with as much grace and dignity as I can muster, given how hollow the words can ring at times. In fairness, I don’t imagine it’s any more comfortable on the other side of the conversation, but the end result is that I have often simply avoided the topic, or situations in which it might come up.

So when my good friend and fellow veteran Amanda invited me to join Team RWB, I hesitated. For a year. I wasn’t sure what to make of all the cheering and flag waving I saw from Eagles at my local races. They were just so… unreasonably friendly. I thought it strange for a service organization aimed at veterans to have so many civilian members. In short, I didn’t get it, and wasn’t sure that I wanted to.

But then there was this bike ride. 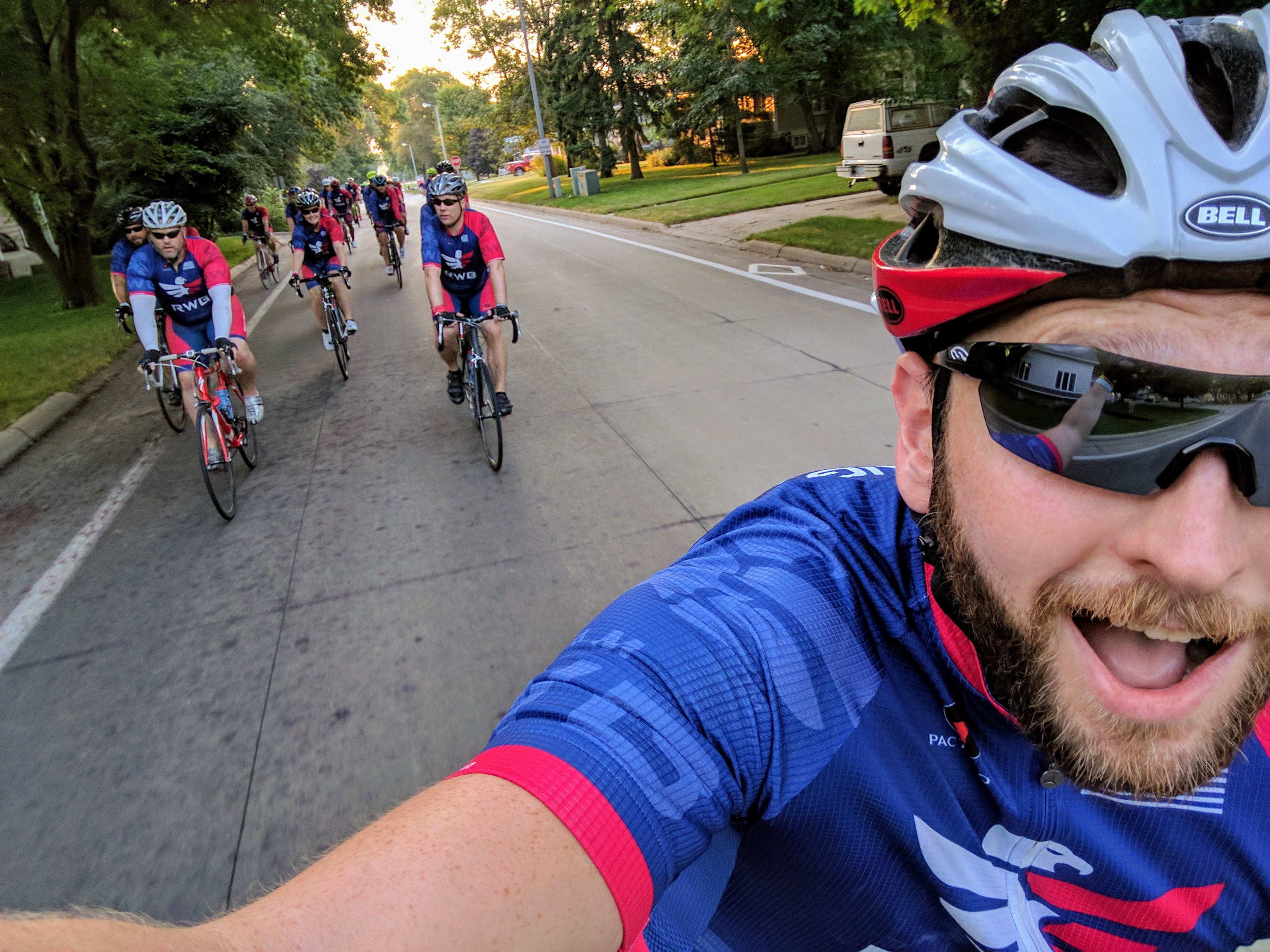 The (Des Moines) Register’s Annual Great Bicycle Ride Across Iowa (RAGBRAI) is a weeklong, rolling celebration of everything with wheels and pedals. It begins at the western border of the state and ends at the Mississippi River. Along the way, the route is punctuated by postcard-worthy scenery and beautiful little towns left untouched by time; sprinkled with beer trucks, pork chops, and every imaginable nutritional transgression. It’s Woodstock for bikes, only with a more diverse turnout.

Amanda upped the ante, inviting me to join RWB specifically to go to RAGBRAI, and I ran out excuses not to do it. I can’t turn down an epic bike adventure, and a week of camping and riding sounded like just my kind of party.

The week started with what should have been a miserable car ride, but instead was a fascinating, stimulating, and frequently hilarious 18 hours. That we had three grown men sharing the back seat of a pickup truck did nothing to dampen our humor, even when Mike decided to use me as a pillow for the last couple hours of the drive.

That would set the tone for the rest of the week (the attitude, not the cuddling). Our crew of 28 riders, plus support vehicles, drivers, and family members formed a happy little band that, over the course of just a few days, started to feel a lot like the military family I recently left.

The most remarkable thing about that feeling was that, unlike most social situations, you couldn’t readily distinguish between veterans and civilians. What’s more, nobody seemed to care. It wasn’t that your service didn’t matter—quite the opposite, I’ve rarely felt such genuine appreciation—it was that everyone valued everyone else as a complete, complex person, rather than some imagined, monochromatic stereotype of a veteran.

This acceptance and positivity manifested in the smoothest week I have ever been a part of, inside the military or out of it. There were no fights or bickering, no cliques, and nobody causing problems for the rest of us. We rode out as a team every morning and reunited every evening, and in between we did whatever we felt like doing, together, in small groups, or alone (that is, as alone as you can be among ten thousand other cyclists). I learned that this was no accident; RWB leaders intentionally shape the culture of their chapters according to a carefully crafted Ethos, and RWB members cheerfully adopt and live to that standard. Over eight days and 518 miles, I would make more friends and create more memories than in any week in recent memory. We got up early, groaned through our aches and pains as we broke camp, and got on the road by 6:30 am sharp (ish). We rode fast, we rode slow, we drank beer and ate pork chops and shared grilled cheeses (with bacon!), and waited in line in the sun for ice cream churned by antique John Deere motors. We battled the wind, hid from the rain, and took care of each other when the going got rough. We learned from each other, laughed with each other, and created dozens of inside jokes that I won’t get to use again for a year.

Riding RAGBRAI with Team RWB gave me the opportunity to decompress, and to be my whole self among people who were my friends before they ever met me. Before that week in Iowa, I didn’t know those sorts of friendships could be formed outside of a grueling military experience. But now, I know that this team is full of people I would go anywhere with, to do anything, for any reason. When can we do it all again?