“I joined Team RWB to try and escape the dark place I felt like I was in. Six months prior to joining, I had been diagnosed with severe depression, and every day felt like a struggle. The medication I was taking didn’t make me feel better, it just didn’t make me feel worse. I passed the Team RWB booth at a local race expo, and as I walked by, a member asked if I was curious about Team RWB. I initially said no and kept walking, but then I decided that maybe it was ok to listen. As they gave the pitch, my first comment was “I’m just a civilian,” which was immediately dismissed. “You’re not just a civilian, you are a person we want in this organization.” I then signed up, not knowing what to expect. A week later, I attended my very first event, which happened to be rock climbing at a local gym. I brought my daughter and decided to see what Team RWB was all about. What sold me on the organization wasn’t how the members treated me. It was how they treated my family. By the end of the event, my daughter had scaled the wall, and wasn’t calling down for me to see her accomplishment, she wanted our local co-captain “Mrs Jenna!” to see her. A few months later, I found myself being able to stop taking medication for depression. I found the missing piece in my life. I found the family, friendships, and camaraderie that I was looking for. Since then, I have taken on a leadership role and have found myself behind that same race expo table, asking the next potential “me” if they’re curious about Team RWB.”

“It’s hard for me to pick a favorite event, because there have been so many! I’ve done things I could never have imagined previously because of Team RWB. Since you’re making me choose, though, I will have to go with running Ragnar Michigan 2016. This was a 200(ish) mile relay race that ran along the west coast of Michigan. What made this so memorable was spending 30+ hours in a van with five other Eagles who were all having just as much fun as I was. From wet socks to passing an alpaca boutique, that trip helped me forge the unbreakable connections with that group that still exists to this day. I’ve moved from spending a day and a half in a (stinky) van with these Eagles to spending family vacations on Mackinaw Island together.” 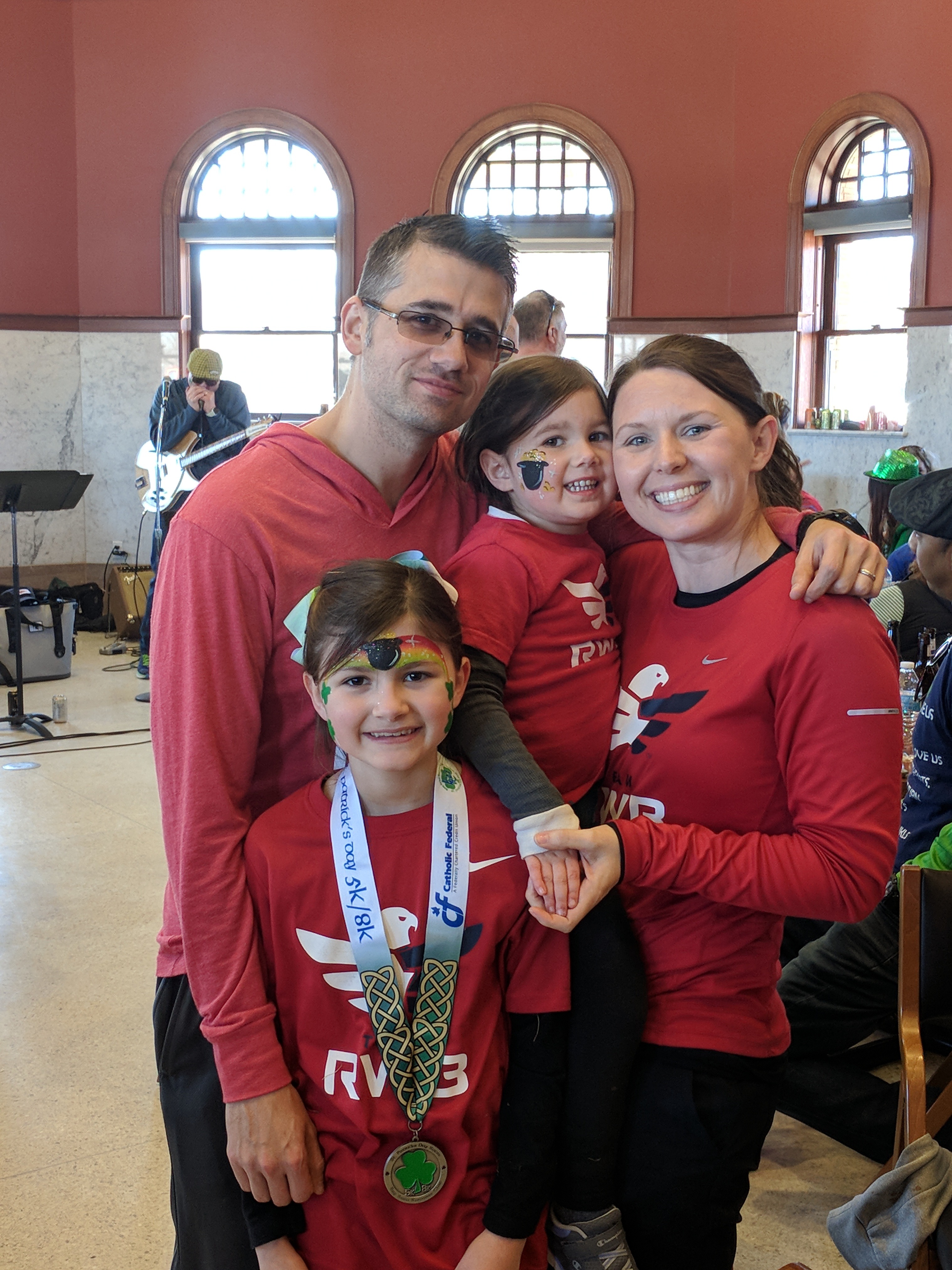 “Team RWB has helped me serve my community in a variety of ways. Probably the biggest being our local chapter’s affiliation with a GORUCK training group, Hyland’s Hopeless. Over the past two years, we have worked together to put on a now annual event, benefiting the local rescue mission. To date, we’ve raised over $15,000. It amazes me what a small group of like-minded individuals can accomplish when they set their minds to it.”

“What inspires me? The people I have met along the way during my journey as an Eagle. A non-running member that wanted to get into shape by becoming a runner. He started a running group that has consistently met before sunrise twice a week for over a year. He began his journey doing 5k run/walk training sessions. This summer, he plans on running a 20 mile leg of a team relay. I’m constantly amazed by not only the things that my fellow members choose to do, but by the support they receive within the group. It’s becoming increasingly apparent that an Eagle never flies alone.”

“If you met me, you’d understand how impactful this organization has been in my life. I’m happier, healthier, and am always looking forward. I feel like I’m a better husband, a better father, and a better person in general. I haven’t just made friends with other people in Team RWB. I have made connections so deep with other members, that they are not “like” family, they ARE family.”

“If you’re thinking about joining, just sign up. There is literally no reason not to. There are no dues, no fees, and no commitments. The only thing Team RWB asks is that if you see an event that interests you, show up and have fun! Members get to engage with the team and community on their terms, and I think that is something that doesn’t happen with every organization.”