Motto: “We can do hard things.”

“It’s honestly a bit of a long story that spans about seven years. In 2009, I was two years out of the Coast Guard when I lost four influential people in my life in the span of a month – three of those were in a 10-day period, two of those were Coastie shipmates to suicide. I mostly dealt with the grief alone, and in an attempt to heal, I decided to train for my first marathon, Marine Corps Marathon. Training for that brought me a new post-military “team”, in the form of men and women who ran the race every year. Friendships and connections were forged at a distance, we kept in touch online and get together whenever any of us happen to be in the same town as someone else. Those men and women to this day inspire me and are some of the best people I’ve ever met and we reunite every year to run MCM together. A few of them were Eagles and I learned about Team RWB from them. I thought Team RWB embodied, at a larger level, this unique, supportive community of runners I became a part of. I was able to share my struggles and story with them without fear of judgement. Being a part of something larger than me, again, was something I wanted to focus on every day. Years later, in 2016, I was ready to leave the career that was a good fit for me coming out of the Coast Guard, but that I didn’t want to do anymore. I was fortunate enough to become a member of the Executive Staff and a Chapter Captain. Best decision I’ve made in a very long time!”

“There are so many to consider! I would have to say experiencing and participating in the Old Glory Relay, both as a staff member and as a Chapter Captain, would be one of the most memorable. It brings not only Eagles together from all parts of the country, but connects us to each community we carry Old Glory through. The flashes of little moments that happen are the ones I remember the most; in Arizona, blind WWII veterans carrying the flag through a VA hospital campus; Lauren, a Starbucks barista and Army Reservist in Alabama who got teary when we gave her an OGR coin. Recently I had the opportunity to be a part of the Veteran Woman Athletes Initiative by the VA’s Center for Women Veterans. It was an honor to be selected with such an incredibly inspiring and diverse group of women, from triathletes, rock climbers, runners, Paralympic and Wheelchair Games athletes.” 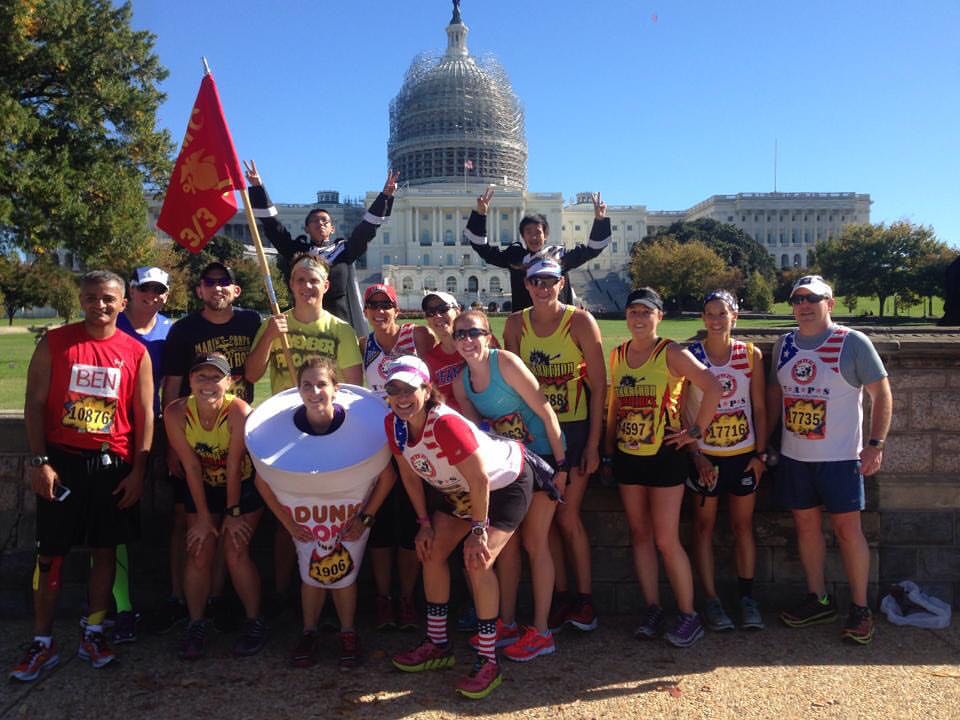 “I’ve enjoyed coaching AAU girls basketball and Girls on the Run. I believe some of the best lessons in life are learned early in life through sports. I started the New Orleans RWB Chapter in October 2016 and served as Chapter Captain until December 2017. I’m now the Chapter Captain of Covington/Mandeville which is the small town north of New Orleans my husband and our family live in. It’s been really fun getting to know other groups in our area and figuring out how we can participate together in our community.”

“People who have a “no excuses” attitude and don’t allow any type of adversity get in the way of a goal that they set or living the life they desire. Those individuals who have such a strong sense of spirit that it’s infectious to those around them. People like Bailey Matthews, a boy with cerebral palsy who cheerfully completed a triathlon; Ariana Luterman, and Meghan Vogel who showed incredible displays of sportsmanship and kindness to others. I’m inspired by people who, despite fear, are brave enough to stand alone and ask for help, admit a wrong doing or stand up for others.”

“I have developed some of the most cherished and valued relationships in my life and I am surrounded by people who care so much for one another, a solid community. It’s opened up exciting opportunities for me to explore my own growth, professionally in business development and personally as a hopeful writer. It was important to my husband and I to ensure our kids are involved in Team RWB. They’ve worn the Eagle while challenging themselves in a 12K run, to helping package hurricane relief supplies at our local food bank, always admitting in the end they had fun despite the hard work! Them diving right into activities alongside adult Eagles prompts them to ask us questions, exposes them to their community and allows us to have constructive conversations with them on veteran and community engagement, having a sense of purpose and positive physical and mental health. Being a part of Team RWB has had a vital impact on our family as a whole.”

“Just show up. Show up to anything; a run, a ruck, a service project, a chat over a cup of coffee. If someone just gets out there, meets other Eagles and experiences the magic of connection that comes with a Team RWB activity, it will stick with them. They’ll be back to participate in something else and make a new friend. Some of my best “hell yes” moments as a Chapter Captain are when a brand new face shows up at an event. Someone was brave enough to show up and try something new and hopefully they’ll be back.”

To learn more about Sarah and her fellow Women Veteran Athletes, head to our latest blog post here.