Motto: “The body will always achieve what the mind sets as a goal.”

“I am a veteran of the US Army for 9yrs and recently decided to re-join the ranks within the Florida National Guard. During the beginning of the year 2016, I had several issues in my life that took me to a downfall. I was talking to one of my friends from the military and she recommended that I visited the local VA. I agreed, and while at the new facility of Lake Nona VA in Orlando, I saw a run to inaugurate the VA. I attended the 5K run although I was not in shape at the moment, I felt pretty confident of my ability to at least finish in the top 10. During the run I was passed by two or three members of Team RWB, and their performance peaked my interest. At the end of the Race I followed them until I saw the Team RWB table. I inquired about the team and signed up that same night. Two days later while running, I received a call from a Leader within the team, and was asking about my interest and what was I looking for. I told Sherrie Labarre about my current situation and how I wanted to do better for me. She right away connected me with several runners, triathletes and even the Team Captain.”

“After networking within the team, I agreed to participate in the Old Glory Relay. I immediately took on the opportunity and register to participate. I was made felt part of the family right away. I had signed up for 3mi run. However due to last minutes move, I ran over 10mi that day. To cap it all off, I then decided to use the bike provided by Team RWB, and ran the rest of the 40 plus miles with the team member carrying the colors. That was one the best days in life in a while. We laughed, we cheer and we had each other backs throughout the entire leg of the relay. At that point I realized that with my level of motivation and energy I could achieve anything I had wanted in life. I began to run more and become more physically active, as I knew that I had the right motivation to achieve my goals. I also met some outstanding mentors within the team that put their training, efforts and knowledge in me to get me in the right paths.” 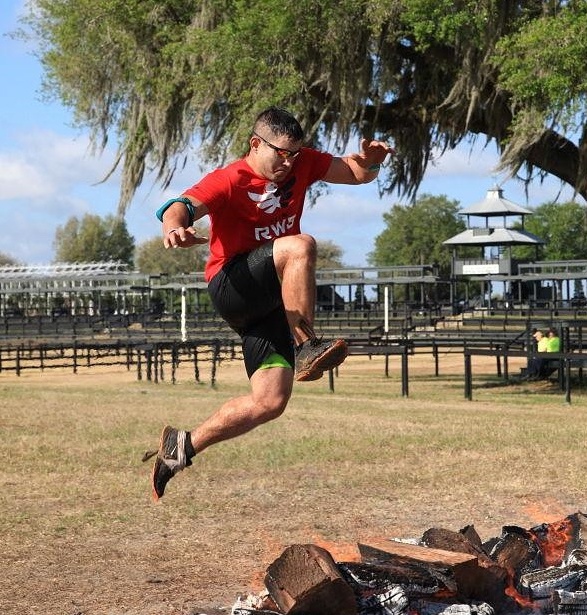 How Do You Serve Your Community?

“Around the month of January and February, I was approached by the team leadership of Orlando Chapter to become one of them and become a Physical Activity Mentor. I gladly agreed and took it as a way of inspiring others to achieve what I have achieved. No one to this point can believe that in a three to four month period I had lost 50lbs, gained endurance and was able to finish a 20mi run, without any issues. I also started noticing that through my social media, I was helping others become more physically active and overcome their own goals and challenges. I started to organize runs around the city of Orlando to ensure that ALL of our members had an opportunity to see what they were capable of doing. From a run at Celebrations Fl to Lake Baldwin. I was making sure our Eagles had a person there to run with them every step.”

“The most satisfying moment with the team continues to be, not my achievements, but the achievements of all those Eagles that did not think they were able to run, or even finish an event. Every time an Eagle I run with or help achieves a goal, I take it as a victory for me. It is in those moments that I feel the best joy, and pushes me to become better and help more Eagles in our family.“

“If I could talk to anyone about Team Red White and Blue to anyone, I will say that this team is not just a team it is a family. A place that if you need a boost of energy and motivation, our Eagles will be there. If you need a partner to go out for a run, our Eagles will go out with you. Team RWB will always find a way to not only be there for their Eagles, but will transform those Eagles into leaders and continue to spread the good among our communities and veterans.“