Why are you here? Storytelling and Leadership in Saving Private Ryan

Why are you here? Storytelling and Leadership in Saving Private Ryan

An Afghan war veteran named James Clark recently wrote an article for Task and Purpose on fictional military leaders he’d gladly follow into combat. One of the leaders he highlighted was Saving Private Ryan’s Captain John Miller, played by Tom Hanks, because Captain Miller was a “quiet, humble, and self-assured commander” who doesn’t ask his men to do anything he wouldn’t do himself. “That’s a leader,” Clark concludes.

I agree, of course, but Clark left out what I think is Captain Miller’s most important skill as a leader. Above all else, Captain Miller is a tremendous storyteller. He understands the power of storytelling and uses his own story to inspire action and provide hope to his men when it seemed nothing could bring them back from the brink of despair.

Allow me to explain. When we first meet Captain Miller, we see how experienced and competent he is. “Move fast and clear those murder holes,” he yells over the din of ocean and machine as he and his men approach the beach on D-Day. “Keep the sand out of your weapons. Keep those actions clear,” he reminds them. “I’ll see you on the beach.” Then the ramp drops and the first three or four rows of men are almost instantly mowed down by the German machine gunners on the ridge above the water. “Over the side!” Miller orders. 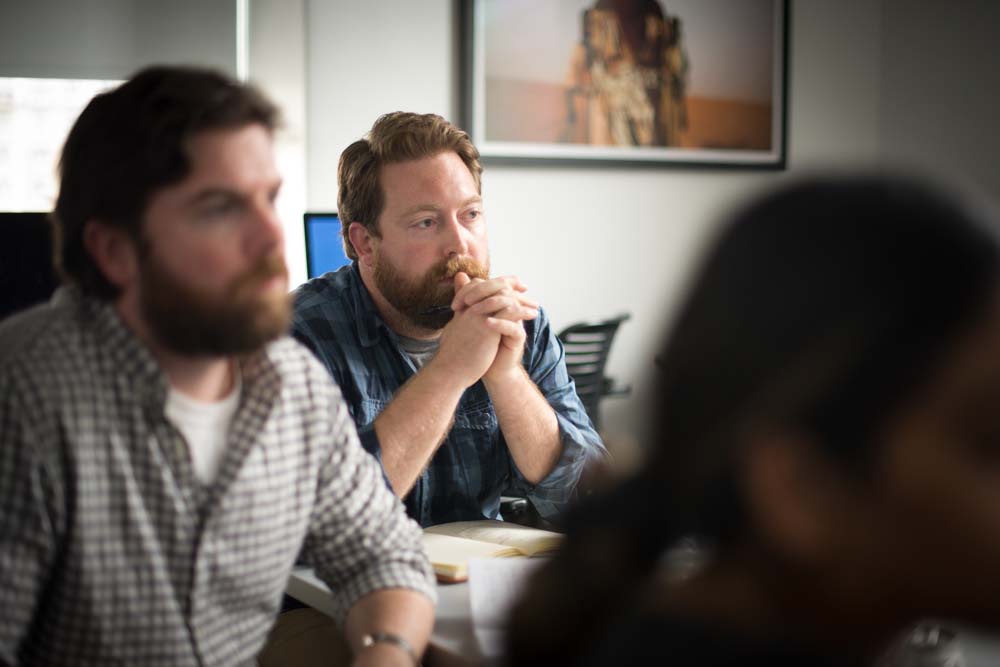 Once Miller finally reaches the sea wall in front of the German fortifications, his mind clears. “Who is in command here?” he asks. A soldier to his right responds: “You are, Sir.” No one is where they are supposed to be. The armor hasn’t made it onto the beach. Nothing is going as planned. “Gather weapons and ammo,” he orders. Then he calls for the Bangalores so they can blow a hole through the German defensive fence at the top of the sea wall.

Once he and his men move behind some cover, Miller orders a few of his men to rush an impact crater where they might have enough cover to take out the machine gun nest that is pinning them down. We don’t see what happens to these men, but we are led to believe they didn’t make it when Sergeant Horvath says, “It’s a Goddamn firing squad.” Captain Miller replies, “It’s the only way we can get everybody the hell out of here.” The second group Captain Miller sends doesn’t make it either, so he calls on Jackson, the sniper. But before sending him out, Miller exposes himself to the machine gunners, drawing their fire long enough for Jackson to scramble into the crater, where he takes two clean shots at the machine gun crew. “If your mother saw you do that,” Horvath tells Miller, “she’d be very upset.” With the crew eliminated, the rangers are in business.

The mission that day was clear: Get off the beach or die.

A day or two later, Captain Miller is given another tough assignment—one “straight from the top”—though the mission isn’t as clear as it first may seem. He learns that he and a small squad of his choosing must find a Private James Francis Ryan whose three brothers have all been killed in combat. After finding Ryan, they’re to bring him back so he can go home to his grieving mother. “It’s like finding a needle in a stack of needles,” Miller tells Horvath.

While on patrol, we learn the men don’t know much about the Captain. We later learn there’s a pool with a prize of $300 to the man who figures out where he is from.

We also hear the first grumblings about the mission from the men. It’s not clear why they’re doing what they’re doing. “You want to explain the math of this to me?” a soldier named Reiben asks. “Where’s the sense in risking the lives of the eight of us to save one guy?” The medic tells Reiben to think about Ryan’s mother, but that logic doesn’t add up. We all got mothers, Reiben says. “Theirs not to reason why, theirs but to do and die,” another soldier responds, quoting Alfred Tennyson’s “The Charge of the Light Brigade.” That argument doesn’t seem to work either. Then Miller weighs in: “We all have orders, and we have to follow them.” Even when they don’t make sense, Reiben responds. Especially, says Miller.

Reiben then asks if the Captain ever gripes. Yes, he says. But he doesn’t gripe down, he always gripes up. That’s the way it works. Reiben then asks what Miller would say if Reiben was a Major, and Miller responds: “I’d say this is an excellent mission, sir, with an extremely valuable objective, sir, worthy of my best efforts, sir. Moreover, I feel heartfelt sorrow for the mother of Private James Ryan and am willing to lay down my life and the lives of my men, especially you, Reiben, to ease her suffering.” Captain Miller gets a laugh, but he doesn’t get buy-in. The story he’s told about this mission—the “why are we here?” story—isn’t good enough.

When the men finally reach Neuville, a small French village not far from the Normandy beaches, they find rain and heavy fighting. Caparzo, one of the men in Miller’s squad, deviates from the mission to help a family who’s caught in the crossfire. This decision ultimately costs him his life. “They want us to take the children,” Upham translates. When Miller orders Caparzo to give the family’s young daughter back, Caparzo says, “The decent thing to do is to at least take her down the road to the next town.” Miller is frustrated by Caparzo’s insubordination, even if he realizes Caparzo has the purest of intentions. “We’re not here to do the decent thing,” he says before yanking the child out of his arms. “We’re here to follow fuckin’ orders!” Again, because the mission is unclear, the men aren’t sure what they’re supposed to do. Then a shot rings out and Caparzo is down.

Later that night, Miller and Horvath are talking in a bombed-out church over a cup of coffee. “When you end up killing one of your men,” Miller says, “you tell yourself it happened so you could save the lives of two or three or ten others. Maybe 100 others.” Miller then confides that he’s lost 94 men under his command since Kasserine Pass in Northern Africa and that he justifies this to himself by saying he saved the lives of ten times as many. “And that’s how simple it is. That’s how you rationalize making the choice between the mission and the man.” But with Private Ryan, things are different. The mission is the man.

The next day, Miller’s squad comes across a German machine gun nest, and Miller decides to assault it. When one of the men, Mellish, says it’s not their objective to take out this machine gun—that it won’t help them complete their mission—Miller snaps back that their objective is to win the war.

During the assault, the squad’s medic is fatally wounded, and the men also capture a German soldier. When Miller decides to cut the POW loose, the squad’s discipline dissolves. Reiben threatens to abandon the mission, and Horvath draws his pistol and threatens to shoot him for desertion.

Just when the tension reaches a fever pitch, Miller asks the men a simple question: “What’s the pool on me up to?” He tells the men he’s a school teacher from Pennsylvania who coaches baseball in the spring. “Sometimes I wonder,” he says, “if I’ve changed so much my wife is even going to recognize me whenever it is I get back to her.”

Then he says he doesn’t much care about Ryan: “The man means nothing to me.” But if bringing him home earns Miller the right to go home, then “that’s my mission,” he says.

For the first time since D-Day, the men have a clear understanding of their mission—to bring Ryan home so that they can go home, too. Reiben then decides to stay. Why? Because he and the rest of the men finally know two things. They know who Captain Miller is, and they know why he’s there.

Who are you? Why are you here? There may come a time when you’ll need to tell a story that answers those two questions. Will you be ready?

David Chrisinger believes everyone has a story, and he’s dedicated his life to helping people find and share their story in a way that leads to understanding and connection. He serves as a Midwest Coordinator for Team RWB and is the lead instructor for Storytelling Camp. In 2016, David edited a collection of essays written by student veterans titled See Me for Who I Am and is editing a similar collection of stories written by Team RWB leaders from around the country. 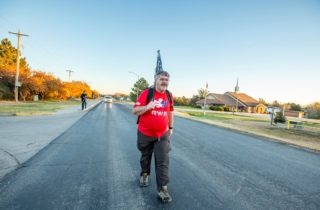