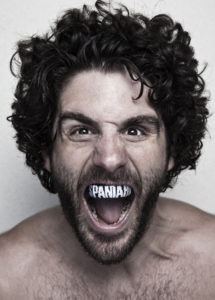 Brenneman shares his perspective on how to get moving during Team Red, White & Blue’s Take Flight Challenge and start 2020 off on the right foot.

When it comes to New Year’s resolutions, Charlie Brenneman prefers the perspective of changing mindset or adopting a new philosophy, rather than the concept of ‘new year, new me.’

“Generally, my top-level view of New Year’s resolutions is that it’s a philosophy I live. It’s not from January to January,” said Brenneman.

While pursuing a career in fighting, Brenneman made his own major mindset change and focused on overcoming his fears to achieve his goals. He learned that if he didn’t stop, pushed through, and kept going, he could do anything he could put his mind to. “Just keep going,” became a mantra and was what he told himself when things got difficult.

“I’m not the strongest or the biggest, but know that I can look at everyone and say I will not stop,” said Brenneman.

Brenneman encourages Team RWB members taking flight this January with the mindset that movement is a philosophy – a major life change first, and as a resolution second.

Brenneman also challenges Take Flights participants to be realistic and keep it simple in choosing their movement goals and resolutions. He recommends focusing on consistency and small manageable habits like drinking water throughout the day or walking instead of grandiose goals that are set up for failure.

“I generally have some targets for the new year, but it’s never something like workout for ‘x days a year’, its general improvement stuff, like working on being less irritable. A couple of years ago, my goal was to decrease my sugar intake,” said Brenneman.

Brenneman’s personal challenge to Take Flight participants in January is to drink water, read books, and to either walk every day or practice burpees depending on ability level.

It’s no secret that one of the easiest ways to ensure consistency in movement is to prioritize it. Charlie Brenneman says that for his family, training is a priority. He builds his day around the exercise that he needs to accomplish like training and reading to prepare for his show.

Mindset and gratefulness also play into the prioritization of movement for Brenneman. After his brother was diagnosed with a brain tumor and began cancer treatment, Brenneman drew from that experience to serve as an extra motivator.

“You see so many military folks talk about living with purpose in memory of someone they lost in battle, and when it was my brother, it clicked. I got it,” said Brenneman. “Now, if I’m pondering about going downstairs to exercise, I say to myself that Scott would kill to be here right now. I remind myself that I, Charlie, have the ability, so get down there and do it.”

At Team RWB, we say that great achievements are never accomplished alone, and luckily, when you’re an Eagle – you’re never alone! That sentiment also rings true for Charlie Brenneman, who says that togetherness, connectedness, and community are key to accomplishing goals.

Brenneman recommends finding an encouraging community that fits your lifestyle. Whether that’s your local Team RWB chapter, a group of Eagles that you connect with virtually, or even listening to inspirational podcasts or reading books.

If you’d like to hear more from Brenneman about his journey, check out his daily podcast or his new book Becoming the World’s Toughest Lifelong Learner: A Book for Anyone Who Wants to Pursue Anything.

We hope you’ll join our 2020 Take Flight Challenge. Ruck, run, ski, mountain bike, or yoga – whatever stokes your #EagleFire. As long as you’re moving, it counts!