Running 100 miles in 24 hours seems like an impossible feat to many of us, but for Team Red, White & Blue member Dustin Johnson, it’s the perfect opportunity to put his grit to the test and inspire others.

On February 1, Johnson will run 100 miles in 24 hours as part of the Taji 100, a race benefitting Team RWB that encourages all participants to run, walk, ruck, or elliptical 100 miles throughout the month. The race honors the legacy of American service members who were stationed at Camp Taji, Al Taji, Iraq in 2010 and created an event to promote cardiovascular activity and fitness during deployment.

As an Army Reserve veteran, Johnson will not only carry on the legacy of those service members, but will also create his own.

“My hope is that people will be inspired or motivated to make positive, healthier changes for their life, and that I will, in turn, challenge myself and bring awareness to Team RWB and the veteran community as a whole,” said Johnson.

Johnson got involved in Team RWB about three years ago when he was training for a half marathon. At a drill, he listened in on a presentation about veteran resources including Team RWB and quickly became an avid member, and later, accepted the role of volunteer chapter captain for the Indianapolis chapter.

Alongside his team, he took on the Taji 100 in 2019 and built lasting relationships. When he first accepted challenge, he thought that as a father, husband and with a full-time job, he would have difficulty putting in his miles. Instead, he found that with Eagle Nation by his side, he had the accountability he needed to push himself and stay active.

“It was fun because there was a group of about 10 of us who were constantly challenging each other. Every day, we were sharing with each other what runs we were doing and celebrating together, even getting together for group runs,” said Johnson. 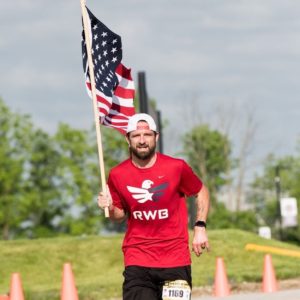 When he kicks off the first 10-mile leg of his 100-mile journey on Saturday, those same Team RWB Eagles will be there to support him.

“When I’m running each leg, someone will be with me. I think that shows the true testament of what Team RWB is about – Eagles never fly alone,” said Johnson.

When Johnson originally decided to take on the Taji 100 in one day, he set out to challenge himself. As he shared his goal with his team, he realized that this was a great opportunity to do something more and to spread the word about the true mission and meaning of Team RWB. He hopes those that watch him on social media or through local news coverage will see the power of community.

“When you come together to do something hard or something difficult, the people around you want to be a part of it. They want to help you and see you accomplish your goals. That’s what Team RWB is all about – coming together as a community,” said Johnson.

If you’d like to join him in taking on the Taji 100, you can register at taji100.com. Whether you complete all 100 miles in one day, or take it day by day, every step supports a greater cause – the health and wellness of the brave men and women who served our nation.