This past Sunday on Veteran’s Day, I had the honor and privilege of heading to NYC to join up with Team Rubicon. I had seen a post by Mike Erwin on Facebook asking for volunteers, so I jumped at the opportunity to get involved. I’ve been involved with Team Red, White & Blue since returning from Afghanistan in April. As a member of TRWB, I’ve raised money through various races, participated in group events, and volunteered at various functions. Although still on active duty in the Army, I was looking for a way to serve where I felt like I was directly making a difference. I’ve always enjoyed athletics and competition, but I wanted it to count for something good. TRWB gave me that opportunity; I get to serve those in need, and it gives me the opportunity to use my gifts and talents for something worthwhile. That is why I am involved with TRWB, and that is why I volunteered with Team Rubicon on Veteran’s Day.

Team Rubicon is an organization that recognizes and harnesses the skills of military veterans; offering them a chance to continue their service by helping themselves and empowering those afflicted by disasters. Many veterans desperately want to continue to serve their country and those in need. They just need an organization that gives them purpose, direction, and motivation – something that they had while in the military. Team Rubicon provides just that – reminding veteran’s that you don’t have to wear the uniform to serve your county and make a difference. The beauty of it all is that while Team Rubicon members are serving and helping to save others, they are also saving themselves – being reminded that they have something worthwhile to offer the world and that they are needed in a big way.

I left from Syracuse Saturday afternoon and made the five hour drive to NYC. As I stepped into the warehouse where the Team Rubicon headquarters was located, I could immediately tell this was an operation being run by former military personnel. Laptops glowing, coffee pots humming, and cots lined up in a row. All of the usual suspects were visible as well — camouflage pants, desert boots, waffle tops, watch caps, and of course, the always reliable woobie! After dropping off my ruck, I received my in-brief, set up my cot, and bedded down for the night. And even though it was a Red Cross cot, it was still a pain to get set-up!

The day started bright and early at 6 am. Just like during an Army field problem, everyone slowly started peering out of their sleeping-bags, waiting to see if anyone was going to make a move and get up. The smell of coffee got everyone moving, and by 6:30, we were all ready to go. I stepped outside momentarily to enjoy the beautiful morning, take in some fresh air, and enjoy the moment. There was no-where else I wanted to be on Veteran’s day. We loaded up into 15 passenger vans and made the 45 minute drive to Far Rockaway, NY — one of the hardest hit areas. As we drove to the site, we passed by a dump site that was being used to collect all of the trash and debris. There were piles and piles of garbage as far as the eye could see. Just like my deployments to Iraq and Afghanistan, seeing the destruction and devastation around got me thinking of just how blessed I am. We often don’t appreciate all we have until it is suddenly taken away from us.

Once we got on site, we moved to the group staging area. Soon, buses and buses of civilians started to show up. The civilians received their in-brief, were issued safety equipment, and awaited assignment to a team. Team Rubicon assigned veterans as team leaders to take charge of the civilian volunteers. Veterans are perfect for this kind of thing – we have the ability to think on our feet, get the job done, and lead others. I was put in charge of a group of four civilians – Patricia, Paul, Bill, and Dee. There was nothing special about our group – most of us had only a modest amount of experience with this kind of thing. Patricia was a middle-aged woman who does marketing for her day job. Bill was also middle-aged and works in financial services. Dee was supposed to run the NYC marathon but stuck around to lend a helping hand. And Paul was just an average guy in his 20’s. What we did have in common though, was a desire to serve and make a difference.

My team was assigned to a group of apartments on 92nd street – right next to the water. As we walked the mile and a half to the site, we passed by dozens of destroyed cars, fallen trees, power lines, and storm-surge sand that had blanketed the entire area. When we arrived, we were met by one of the residents, Eric, who was coordinating efforts on behalf of the other renters. He looked tired and beaten down, like a man who hadn’t slept in two weeks. Volunteers had already gutted many of the buildings in the area, but there was still one basement to do. Our job was to clear out the debris, tear out all of the water soaked dry-wall and insulation, and remove framing. Throughout the course of the day, we filled up dozens of 30 gallon trash bags. At one point during the day, a husband and wife, the owners of the apartment, showed up to retrieve some of their personal belongings. It was heartbreaking seeing the wife as reality set in for her and she saw much of her apartment piled up on the curb. 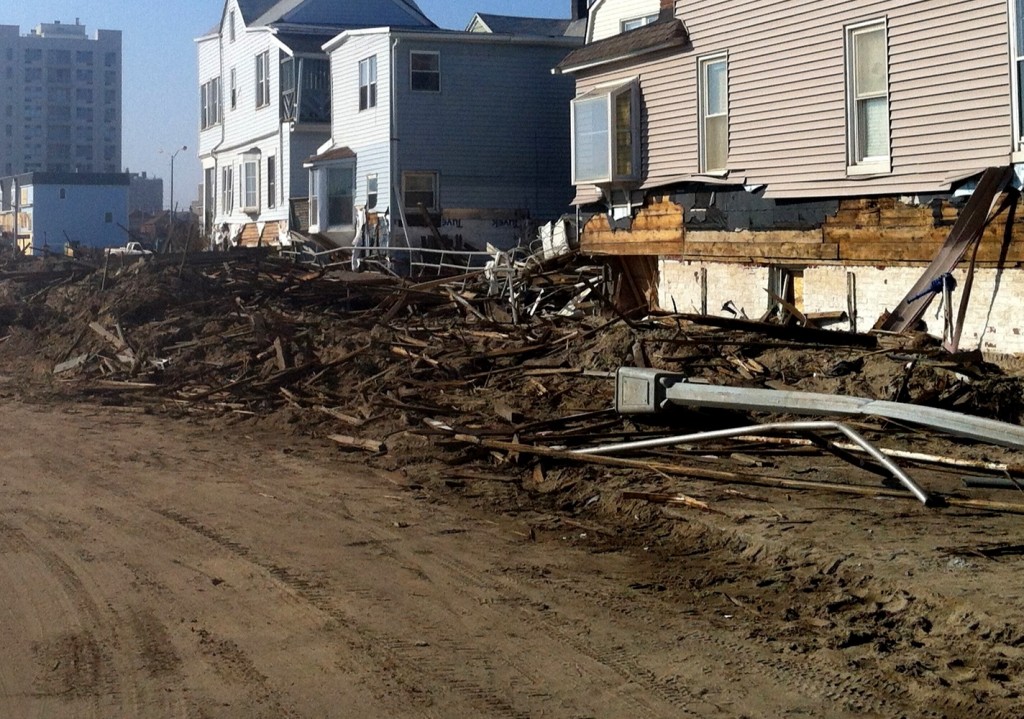 After clearing out the entire basement, my group wrapped things up and made the walk back to the Team Rubicon headquarters. During the walk back, Patricia and I had a chance to talk about the day. She was so thankful for Team Rubicon and the work they were doing. Instead of just throwing money at the problem, she wanted to be involved in getting her hands dirty and actually getting involved. She commented that, “You don’t really appreciate the devastation until you see it for yourself. I’m so glad I had a chance to come down today and help out, and that Team Rubicon coordinated it all.”

After returning back to headquarters, the whole group headed out for dinner. We went to the closest place we could find for a little Mexican cuisine. I felt a little bad as our group of 15 interrupted the only other people there – a young couple on date. During dinner I had a chance to get to know some of my other teammates. A group of five volunteers, a mixture of veterans and civilians, had driven in all the way from Michigan. There was even a group of Norwegian military folks that came! They heard about what happened and wanted to get involved in any way they could. I had a great conversation with a guy who used to be a Marine Scout Sniper. He’s at Michigan State now finishing up his senior year and a degree in accounting. Each person had their own amazing story, and all of us were bonded in a way that only veterans know. We came from near and far to do what veterans have always done – selflessly serve others.

It was great seeing veteran and civilian volunteers joining forces. It was also great seeing so many young individuals getting involved. My generation has often been criticized – and rightly so, for having an attitude that says, “The world owes me something.” My generation has so much potential for doing good and making a powerful difference. I just hope that we can start channeling more of our energy, passion, and innovation into helping others. Indeed, what is the point of being young, healthy, and able if it is not being used for good? I am thankful for organizations like Team Red, White, & Blue and Team Rubicon and the work they are doing for those in need. Thank you for helping veterans realize their potential and helping them harness their abilities for good. 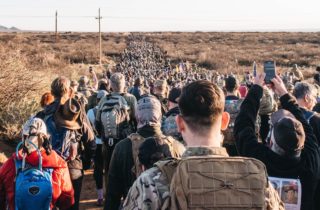