Vulnerability and the Act of Conquering Fears

Vulnerability and the Act of Conquering Fears

Backing up to a cliff face towards a 125’ drop seems like an unnatural act, doesn’t it? Well, actually, with the right equipment, the right guide, and the right group encouraging you, it can be a very rewarding experience. This was just part of my adventure at the 2016 Team RWB Mid-Atlantic Rock climbing camp, held in the New River Gorge area of West Virginia.

This was my first opportunity to be an active participant in a Team RWB event, and it proved to be unique in its ability to immediately create an environment of inclusion and acceptance. I’ve been to events and training where the presenter claimed we were in “safe space” while there, but this is the first time that, although I didn’t hear the term uttered by the leadership team, I truly felt the safe space created by their willingness to take the lead in being open, honest, and vulnerable.

Being comfortable in one’s own vulnerability can be very important when backing up to that cliff. After an evening of Pies and Pints at the meet and greet, we leapt right into climbing camp the next morning to learn the basics of tying ourselves off properly and belaying a fellow climber. No pampering here. The crew goes above and beyond to ensure your safety, but you have to get the basics down to get a sense of, and respect for, the technical skill involved in participating in this sport. 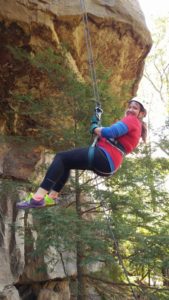 Then you have to get yourself to the top of the cliff. Which brings me to the backing off part. I thought it would be much more difficult to take those steps back, but Jeremy (one of our ever tolerant guides) had me lean my full weight back in the rig once I was secured and, for some reason I will never understand, I felt instantly safe and confident in the system. I won’t say I thoroughly enjoyed that first time down – I was still a bit apprehensive – but I went back up immediately for a second turn!

After a top notch lunch spread provided by our hosts at Adventures on the Gorge, it was off to my first climbing experience. Well, my first climbing experience beyond the dumb-ass things I would do as a kid before I knew I was breakable, that is. Out of the three routes available up the rock face I chose the most difficult one……not because I was confident, but because it was open when I was ready to go and no one else wanted it. The handholds were small and difficult to find, I didn’t plan my route very well, and I found myself relying on the encouragement from below and the skill of my belayer, an experienced, retired climber. I slipped off the wall a couple of times, but made it over a particularly difficult spot only to find another difficult patch standing between me and my goal – the carabiners at the top of the rigging. My hands were shaking and my fingers didn’t feel up to it, so I let my belayer know that I wanted to let go and come down. I said it a couple of times.

His response? “I’m ignoring you.” So I motored on, finally getting mad at myself for not accomplishing this small thing that used to be second nature to me, and made it to the top. Yes!

Now Day 2…that was just plain fun. The climb site accommodated 5 routes (including a stove pipe), each with it’s own unique challenge. We were all able to ascend multiple times and even had a chance to belay for fellow climbers. I came away from the climb with a feeling of satisfaction and accomplishment. And the Day 2 rappel site? Well, take a look at the pics. The view is incredible. At first I was intimidated by the roughly 125’ descent, but I lowered myself about 20 ft, turned around to look at the world below me, and became downright giddy. Most of the rappel was past the rock face, and I took advantage of the mid-air hang time to fully take in that view, the sun, and the feel of the early autumn breeze. Incredible. Never thought I would rappel off a cliff. Never.

So many thanks to Team RWB, particularly Mike Paugh, Brennan Mullaney, and Dustin Sanderson, and to the skilled (and entertaining) staff at Adventures on the Gorge for making this possible. And a special thanks to Kellyn Cassell for introducing me to the RWB family and encouraging me to take on this challenge. Even though I started off feeling vulnerable and unsure, the safe space that was created by the guides and other Eagles at the camp helped me reach outside my comfort zone and grow over the weekend.