We Can Carry Each Other

We Can Carry Each Other

The first time I met Jackie Carl, he was pulling a wagon of outhouse cleaning supplies around the Finger Lake State Park campground in Palmer, Alaska, where he’s the volunteer camp host. He told me he was getting ready to head to the National Cemetery to inter his wife, who died late last year.

I told him I am so sorry for his loss. And to myself I thought “Ah-ha! He’s a veteran.”

Watching for veterans to befriend is something of a hobby when you’re a volunteer leader with Team RWB. Maybe it’s that you’re always on the lookout for someone who needs a little enriching. Or maybe you just really enjoy veterans and the value they bring to the community.

Age has left Jackie, 76, a little hunched over. He wears hearing aids and, like most camp hosts, lives in the campground in a massive RV. His little white poodle, Angel Marie, follows him around the campground as he performs his duties and mitigates problems with cranky campers.

Jackie has been retired from his long Air Force career for over 30 years, he told me. He was stationed around the world and in multiple U.S. states. His wife of 46 years, Carol, died in Arizona on December 23 after a brief illness. When the weather there turned hot, Jackie packed up the RV and moved back to Alaska, where he and Carol had shared a home for 29 years.

Over the last month Jackie has been a part of my personal Team RWB mission. When my family held a small picnic for my husband’s birthday in early July, we invited him over from his RV to share our blueberry pie and ice cream. When we visited the lake a week later for a swim, we swung by the RV and said “hi.”

And when we planned a Team social for the campground I knew exactly what we needed to do: invite Jackie over and make him a Team RWB member.

So that’s what we did. Jackie and Angel Marie attended our picnic, feasted on blueberry cobbler and contributed to the spread with an ice box cherry pie he made in his RV. He had a long conversation with another picnicker, Debbie, after realizing he had served on Eielson Air Force Base with her father.

Jackie doesn’t have a computer, he said, so he can’t register for the Team himself. We didn’t care. We presented him with a Team shirt so he can wear the Eagle, too. We also gave him a bag of chocolate chip cookies to take back to his RV when we were done with the day, and I’ll make sure he gets more blueberry pie before the summer is done. After all, sometimes enrichment comes in the form of baked goods.

When we talk to Jackie about his service and his life, we talk about the places he’s gone, the people he’s seen and the things he’s learned. It may seem like a little thing, befriending an elderly camp host and making him cookies and pie, but this man served his country for most of his life, and continues to serve us in this job with the state park system. It’s the very least we can do. 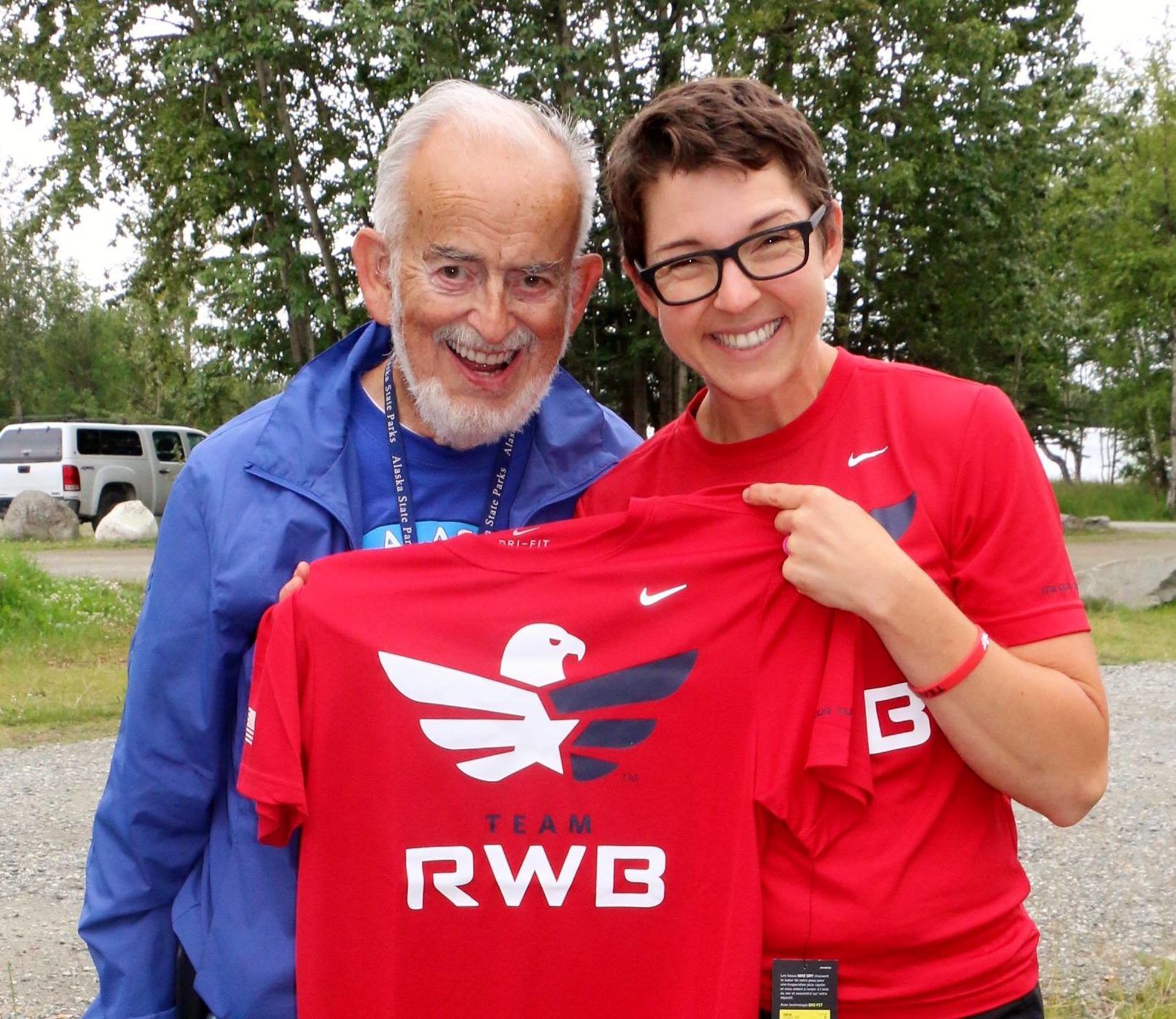 It’s hard to imagine that we’re actually doing much in the way of enrichment. But I am confident we are. Positivity, camaraderie, community – those are just part of the Eagle Ethos, but the truth is when we live the Eagle Ethos towards Jackie and others like him, we do more than just give him a few new friends. We’re giving something to ourselves, too. Because while we are enriching his life, he’s also enriching ours.

And that’s what this Team RWB thing is all about. A kind word, a smile, a few extra minutes to say “hi,” in the midst of a busy day  — they are small gestures, but they make a difference. When we give those things to Jackie, we empower him to give them to others. And the relationship we develop with him because of those simple acts give us the motivation to give those things out again to others.

Living the Ethos is like carrying a self-fueling flame. Positivity spurs positivity. Community builds community. And because of it we can carry each other.

Jackie says he’ll be soon heading back to Arizona after his season as a volunteer camp host is done. We’ll make sure he has some chocolate chip cookies for the road to help fuel that Eagle fire.

And if you see a 76-year-old Eagle with a little white poodle on the road in a giant RV, make sure you stop for a visit. You’ll be enriched.

Amy Bushatz is Chapter Captain for Team RWB Anchorage and a senior editor and reporter for Military.com.