What It Means To Be A Part Of A Team. Meet Adam Silver

What It Means To Be A Part Of A Team. Meet Adam Silver

“I joined the Army in 2008. I was part of that time where everything went fast. Basic training for 9 weeks, Advanced Individual Training for 7 months, then a few weeks off. Next, a month at the National Training Center in California, a few weeks back, and then Iraq. Throw in a marriage, my parents’ divorce, and the loss of my grandfather. It was fast, and it was different.

I spent the better part of a year in Iraq in support of Operation Iraqi Freedom and Operation New Dawn, from October 2009 to October 2010. After we returned home, the year took its toll. I had lost people I had come to know as family. I developed an intense drinking problem. I had disciplinary issues as well as a run in with the law. My marriage fell apart and my life went on a downward spiral. I got demoted and was forced to finish out my enlistment in the Army Substance Abuse Program. Things didn’t look good for me on the outside and in 2012 I left the Army Honorably just before I was forced out.

At this point, I’m 315lbs (Not in the good way) and I have a massive drinking problem. I find out that my ex-wife and my NCO are having a kid together. My mind is lost to the stress and I am contemplating a way out. I talk to friends and family but they don’t understand. I find myself missing Iraq. Missing the stress and anger that consumes you and makes you numb to the outside. Suicide is beginning to seem like the only release and honestly, I was only seconds away on more than one occasion. Somehow, I push through. I hear about an event called the Avon Walk for Breast Cancer. I had lost my mother to breast cancer as a child so I decided 39.3 miles was inconsequential compared to the benefit. That decision changed my life. On May 3rd, 2013, we began our walk at the Washington Memorial. I meet a Marine Veteran and we chat. We are going through the same issues. Hours of talking makes me feel better. Someone who actually gets me, who understands the struggle. Then someone walks up to me. She looks at me and says “I didn’t mean to eavesdrop but did you gentlemen say that you are veterans?” We proudly said we are. She said she wanted to tell us about an organization.

“Team RWB” she said. “Look us up.” She was wearing this bright red shirt with an awesome eagle on the front. I asked her who they were and she explained. She told me how they were a group that is mostly, but not entirely, comprised of veterans. She told me their goal is to help veterans get back to civilian life through physical and social activities. She told me the website and the next day I checked them out. That Tuesday was the beginning of the return of Adam Silver. I went to my first event, a run group in Alexandria, VA. This was the closest to home for me. Within minutes of my arrival I was accepted with open arms. Within days I had people to speak to. People that actually could relate to me through themselves, or through others. They gave me what I missed in the Army. The brotherhood, the family, the stress-free environment that people always have my back. 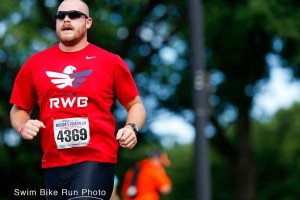 Fast forward to today. I have been with RWB for just 5 short months. It has changed my life. I’m down to 260lbs, and solid at that. I work out 7 times a week. I have run a 5k, a 10k, finished out Anna Runs America in Manhattan, and conquered a Tough Mudder, Nation’s Triathlon, and the Army Ten Miler. My psyche has never been better. I was recently asked to be one of 2 Outdoor Events Coordinators for the largest Team RWB chapter in the country. I have been given the opportunity to sit on a panel and speak to a group of governmental interns on behalf of Team RWB. Hell, I’ll be participating in the Annapolis Half Marathon on November 22nd!

I have once again become an active and productive member of society. RWB has not only given me the opportunity, they have shown me the way. They are my brothers and my sisters. When I needed help training, they were there. When I got injured, they helped me recover. When I lost a great friend, mentor, and battle buddy, they took over as my battles and were there every step of the way. Most of them don’t even know that they did these things because they didn’t intend to, it’s just who they are, who we are.

We veterans tend to think we are badass. We have been to war and that somehow means that we are independent and invincible. We tend to forget that we went to war as part of a unit, part of a team. That team now, that my service is done, is Team RWB. We live the ethos that was so engrained in our brains while we served and we will never stop.

I will always place the mission first.

I will never accept defeat.

I will never quit.

I will never leave a fallen comrade.

Thanks for listening. Thanks for being there. And thank you for your service. #eagleup”