When I Asked, Someone Was There

When I Asked, Someone Was There

As a junior in high school, I saw my life headed down a bad path. In an attempt to find something positive, I decided to enlist into the Illinois Army National Guard in March of 2007. The following summer before senior year was spent at Fort Benning, Georgia for Basic Training, and the summer after my senior year was spent in Fort Jackson, South Carolina for Advanced Individual Training. I didn’t join the military for any patriotic reason; I joined because and I needed something positive in my life. At the time of my enlistment, I had no intention of attending college, it was more of a selling point for my parents. After attending AIT, I spent most of 2008 working odd jobs, and then the 33rd Brigade Combat Team received orders to deploy to Afghanistan. As a human resource specialist (42A), our unit was tasked with preparing the entire brigade for deployment. As each Soldier came through my station, I felt worse and worse. My job was to process all these Soldiers for deployment, while I was doing everything I could to avoid deploying. 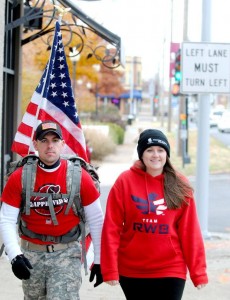 Sometime in the fall of 2008, my unit received orders to deploy. Two teams were going to Iraq, and another team was going to Afghanistan. At that point in time, I had decided to attend college because well, I was about out of options. As a result of my choice to attend college, and ROTC, my unit didn’t put me on the list to deploy. At first I was not aware of this. Once I found out, I said I want to deploy, this is what I signed up for. It’s was my time and I could not keep avoiding it. I took the place of someone with kids and in December 2008, we were headed to pre deployment training. Our team of six deployed to Afghanistan in February 2009. Our team was assigned to the Division Headquarters personnel division. Our mission was to complete all the casualty reporting for Regional Command East. We created the reports for everyone who was hurt, sick, or killed in the region. A job that did not come easy. 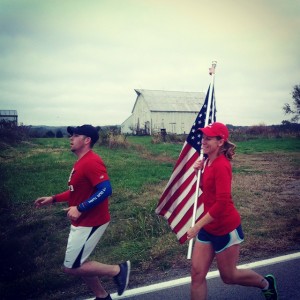 I returned from my deployment in 2010 and decided to attend college. I definitely did not take care of myself, and I spent many nights drinking, eating out, and slowly gaining weight. I was still in the National Guard and for you military people, I was 7% over weight. I spent maybe a couple years on weight control. My initial six year enlistment was quickly coming to an end and I had to make a decision. I was barred to re-enlist so I could either just ride my time out, or I could get into shape and re-enlist. I wasn’t sure what I was going to do without the military. Even though I only reported once a month, it gave my life some structure, and I was not finished using my military benefits. 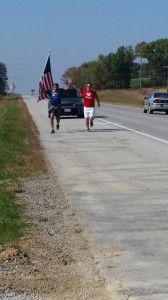 I made a couple of small changes to try and get back into shape. I started to eat a little bit better, and I started working out every now and then. Then I found about Team RWB. It was exactly the thing I needed in my life. I worked very hard and lost close to 50 pounds, removing my bar, and re-enlisting into the Army for another six years. Team RWB gave me the skills and support to get back into shape and remain in the military. As a Specialist in the National Guard, I was not given many leadership opportunities. Team RWB gave me a chance to lead. I was leading other people still in the military, First Sergeants, retirees, officers, mostly everyone was a higher rank than me. As a Team RWB leader, I gained the confidence I needed to be a leader in my own life, and my unit. 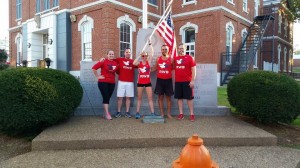 In April 2013, I decided to try and start Team RWB Carbondale, Illinois. It is a college town of 26,000. I knew that Team RWB was something that not only Veterans could benefit from, but also civilians. Nearly two years later, we have grown to more than 500 official members, and have people registered from all over Southern Illinois. The growth and involvement I have witnessed within this community has been absolutely amazing. Every day I am inspired by the people I meet, and the stories I hear.

As far as my military career goes, in March of this year, I hit 8 years in the National Guard. Over the past few months I have slowly started to gain weight again and have realized I was falling into many of the same habits prior to finding Team RWB. Well, I can happily say that this past weekend I was finally promoted to Sergeant. I have started to again rely on my Eagle teammates and they have helped me with many personal struggles I have faced in my life. My message to everyone is that we really do more than just run. We work out together, we support each other, regardless of military branch or rank, and no matter what, there is always someone around to talk to and help. When I asked for someone to work out with, someone was there, when I asked for someone to talk to, someone was there. When I said hey I need to pass my PT test, there was a former NCO around to motivate me. The support I have been given by my RWB teammates has been life changing. I credit RWB, and my Eagle teammates for helping me reenlist into the National Guard and eventually getting promoted. Without RWB, I think my life would like much different. Finally, for those of you who are still reluctant to talk about your military experience, or might be afraid to talk with your chain of command, people are there to help, sometimes it just takes finding the right person.